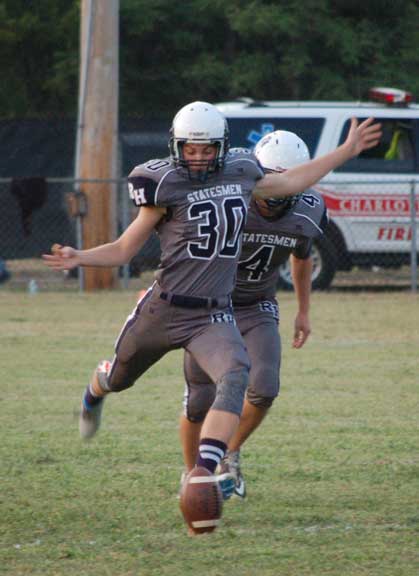 Photo by Titus Mohler Randolph-Henry senior John Walker, No. 30, and the Statesmen are ready to take on their rivals from Prince Edward County.

The Randolph-Henry High School varsity football team comes off its bye week, which was preceded by its first win of the season, and looks to take its momentum into its homecoming match-up with visiting Prince Edward County High School on Friday night.

The Eagles are fresh off a great week in which they played two games and won both in blowout fashion, outscoring its opponents 81-19 and pulling its record up to 4-4.

With two weeks to prepare, Statesmen Head Coach Mark McPherson and his team have studied Prince Edward game film, and he attended their last two games.

“We feel pretty good about our game plan and our preparation,” he said. “We feel like it gives us a good chance to win.”

McPherson said he is impressed with the Eagles’ speed and notes junior Zion Lewis is athletic at quarterback, senior Joel Thomas throws well and senior Brandon Scott and his fellow backs will be dangerous if allowed to find open space.

McPherson said the Statesmen defense cannot afford to chase but instead needs to play well as a unit.

He was pleased to note his team is healthy and will welcome senior Fred Blow-Tydings back to the lineup.

As the Eagles play with playoff hopes, Randolph-Henry (1-6) will look to close out strong, starting at 7 p.m.