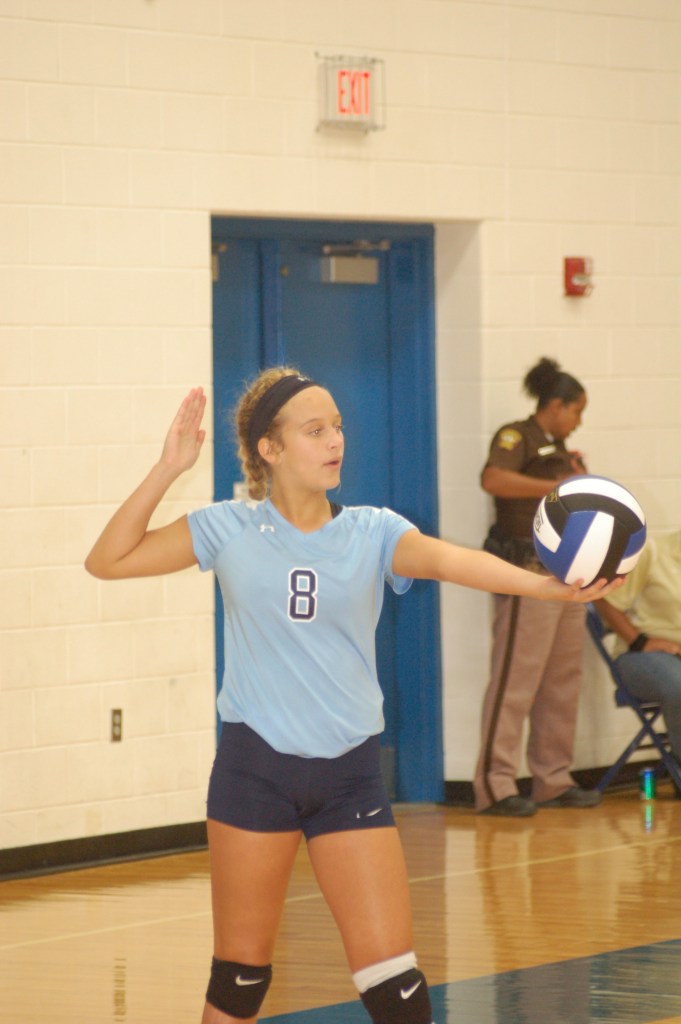 The Randolph-Henry High School varsity girls volleyball team spent last week on a three- game road trip and came away with a 1-2 record.

“The team really worked hard this week,” said Lady Statesmen Head Coach Shep Critzer. “We seem to be finding our rhythm in some areas and playing some good volleyball with a lot of energy, so we’re excited about what the next few games will bring.” 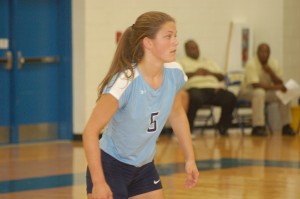 TITUS MOHLER | GAZETTE
Anna-Grace Carie, middle, looks for her opportunity on her defense.

On Monday, the Lady Statesmen traveled to Appomattox and dropped a 3-0 non-district contest. Appomattox jumped out to early leads in both of the first two games. Randolph-Henry was able to close the margin in each one, only to have the Lady Raiders pull away late for the 25-17, 25-18 wins.

The Lady Statesmen seemed to find their rhythm in the final game, as both teams went point-for-point until the game ended with two runs. Randolph-Henry got the first run, a four-point swing that gave them a 22-19 advantage. Appomattox got the last run, though, as it outscored the Lady Statesmen 6-1 down the stretch to close-out the match 25-23.

Annie Sandridge and Kierra Jones led the Randolph-Henry attack with four kills each while Kimmi Horsfall and Anna Pascuita anchored the defense with 39 digs on the night.

On Tuesday, Randolph-Henry faced-off with the Lady Barons of Bluestone. Bluestone kept things close in the first game before a kill from Kendall Bowman sparked a Statesmen rally that closed-out the 25-17 win. It was all Randolph-Henry after that, as it cruised to 25-8 and 25-11 wins in the final sets. 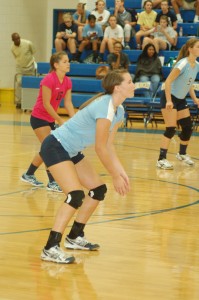 TITUS MOHLER | GAZETTE
Annie Sandridge, in the foreground, and Kimmi Horsfall prepare to defend on the court.

Sandridge led the offensive charge with a season-high 12 kills while Pettus added four of her own for Randolph-Henry. Pascuita and Horsfall added five aces apiece for the Lady Statesmen, who finished the night with 21 total aces.

Randolph-Henry closed-out the week with a visit to Goochland. The district-leading Lady Bulldogs pulled- away late to take the first game 25-14, but the Lady Statesmen regained some momentum in the second.

Behind a strong defensive effort anchored by five digs from Horsfall and an attack led by three kills from Sandridge and two from Pettus, Randolph-Henry led late in the game before Goochland closed out the final points for the 25-22 win.

Randolph-Henry continued to battle in the third game, but the Lady Bulldogs pulled-away for the 25-11 win to close-out the match.

Randolph-Henry will be at home to face Nelson County on Wednesday and Cumberland on Thursday.