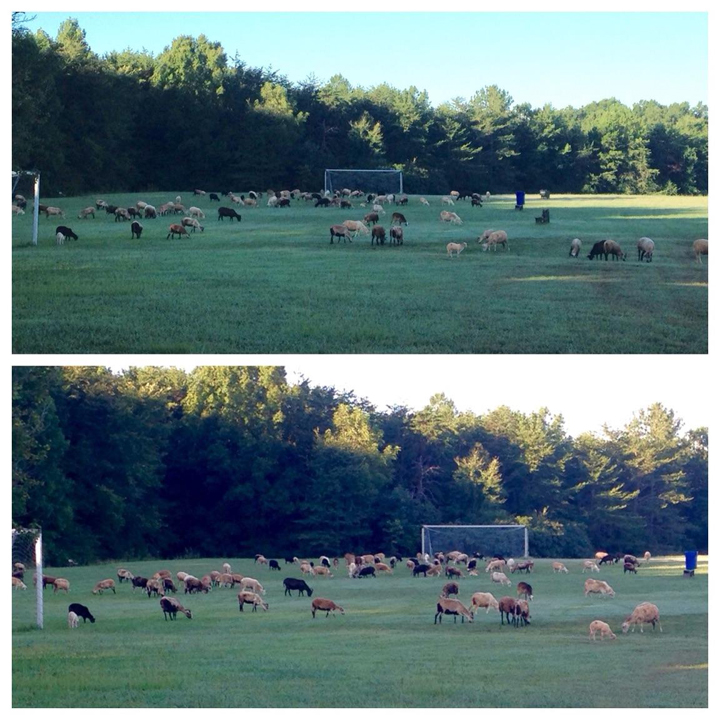 Photo by Nancy Leonard Cows and sheep roam freely throughout the yard of Eureka Elementary School.

Eureka Elementary School is littered with cows and sheep from a nearby farm. The livestock have been leaving behind a mess that makes the space unusable.

Charlotte County Public Schools Superintendent Nancy Leonard said this issue is preventing students from being able to play outside on the grounds and from going outside for scheduled fire drills. In the mornings, because of the mess left behind, students have been delayed getting off the bus, she said.

Leonard said, “The soccer field cannot be used by the children, plants around Eureka are being damaged and the land around the foundation of the building is being damaged.”

The grounds around the school have been rendered unhealthy for safe play.

Historically, Leonard said, a few cows or sheep have come onto the school property periodically, but they were able to run the animals back through a break in the fence, or call animal control to help with clearing the few animals from the property. That is something she expects to happen in this county, she said.

However, Leonard said, “The magnitude and the frequency of cattle and sheep this year has been something completely different. Eureka Elementary appears to have become an extension of their pasture.”

She said the school administrators have called the cattle farmer several times but have yet to see results.

The school has also enlisted Animal Control, which is now a part of the county sheriff’s department. Deputy Troy Elder, the school resource officer, has been helping with the situation as well and is working within the legal system to reach a conclusion.

Because Virginia is a “free range state,” animals can roam free without any major legal repercussions. “It becomes everyone else’s responsibility to ‘fence-out’ what we don’t want on our property,” Leonard said.

She said this issue has led to financial hardship on the school because in order to fence out the animals they would have to finance a cattle-proof and children-safe fence to surround the entire 41-acre perimeter of the school.

Leonard said she hopes to see the issue come to a close soon as there have been no cows or sheep at Eureka in recent days.

“The landowner has advised me that he has moved his livestock to another pasture and will be utilizing his tobacco workers to repair the fencing,” she said.

Leonard said, “We have always been able to work this out in a neighborly fashion, and I feel that this will be resolved in the same manner.”

The issue will be further discussed by the Charlotte County Board of Supervisors during its regular meeting on Tuesday at 1:30 p.m. in the board of supervisors room of the county administration building.