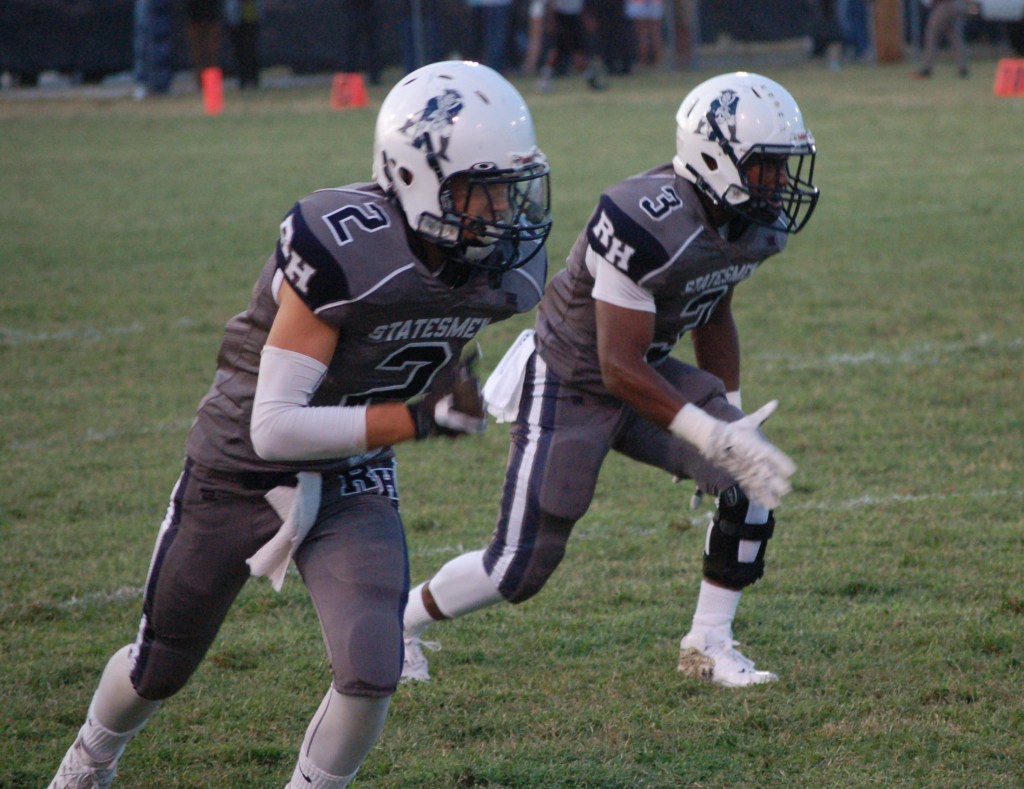 Photo by Titus Mohler Randolph-Henry junior wide receiver Hurley Noblin, left, and senior slotback Fred Blow-Tydings race forward after the hike as they compete against visiting Bluestone High School on Friday night. The Barons pulled away for a 38-15 victory.

The Randolph-Henry High School varsity football team is still looking for its first win of the 2016 season.

The Statesmen took an early lead Friday against visiting Bluestone High School in the first quarter before losing it in the second quarter. Still within nine points near the end of the third, Randolph-Henry allowed a big play and turned the ball over more than once in the fourth, leading to a 38-15 Barons victory.

For much of the first half, though, Randolph-Henry looked like it might have what it takes to get the win. To start the game, the Statesmen kicked the ball off to the Barons, but it bounced on the ground away from the returner in an unexpected manner, allowing the Statesmen defenders time to arrive and claim it for themselves on the Bluestone 25-yard line.

Shortly thereafter, junior fullback Tyrie Blow-Tydings ran for a 14-yard touchdown. Senior John Walker’s extra point made the score 7-0 only one minute and 34 seconds into the game.

It was not until 4:14 remained in the second quarter that the Barons tied the game following a one-yard touchdown run.

The Statesmen did not do much in the ensuing possession, punting the ball back to Bluestone, which returned the punt all the way to the Randolph-Henry eight-yard line. A few plays later, the Barons scored on an eight-yard pass and went up 14-7, a lead they held at halftime.

Bluestone took a 21-7 lead with 5:39 left in the third quarter following a 51-yard touchdown pass.

Again, Randolph-Henry could not respond on offense. The Statesmen punted, and the Barons achieved another big return, bringing the ball to the Randolph-Henry 15-yard line.

Impressive defense by the Statesmen limited Bluestone to a 23-yard field goal, which made the score 24-7.

Still struggling to move the ball consistently on offense with traditional plays, Randolph-Henry surprised the Barons with a double-pass play.

After receiving the ball early in the play on a pass, senior slotback Fred Blow-Tydings appeared to have some running room. But instead of running, he slung a pass to junior wide receiver Trequan Agnew, who had gotten behind the defense and scored on the 80-yard pass play.

Senior quarterback Spencer Parrish passed to Fred Blow-Tydings for the two-point conversion to make the score 24-15 with 1:48 left in the third quarter.

But blunting any momentum the Statesmen had established, the Barons ended the quarter with a 50-yard touchdown pass and went up 31-15.

Nearly midway through the fourth quarter, Randolph-Henry threw an interception that was returned to the Statesmen 25-yard line. This set up a seven-yard touchdown run, helping make it 38-15 with 6:27 left in the game.

On the ensuing drive, Randolph-Henry made some headway into Barons territory, benefiting from a pass to Agnew, but then Bluestone snagged another interception to get the ball back with 4:07 remaining.

The Barons eventually had to punt, and while Randolph-Henry opted not to return it, a Statesmen player accidentally made contact with the ball. Bluestone recovered it to maintain possession with a fresh set of downs.