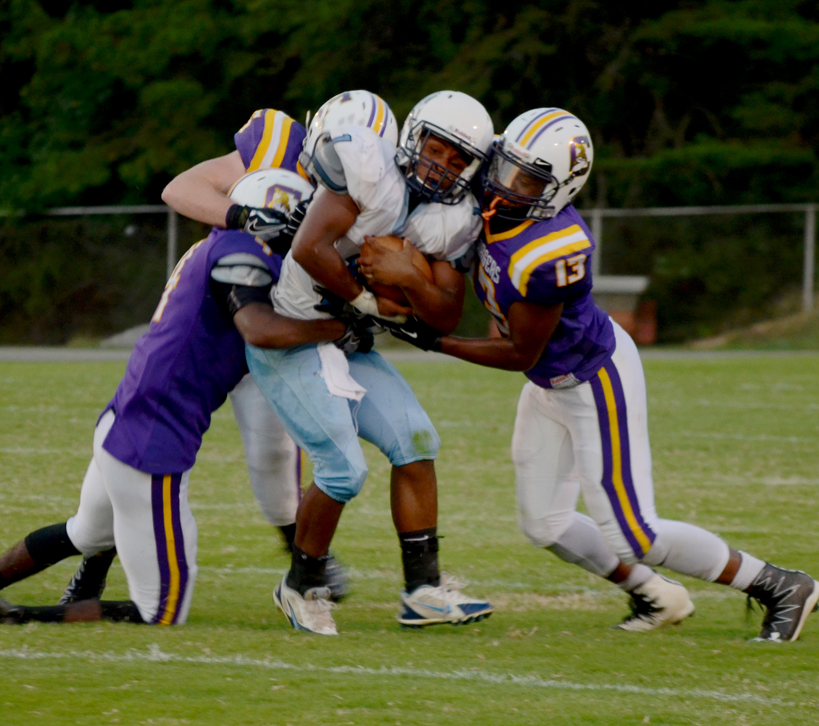 The Randolph-Henry High School varsity football team kept up with host Central Lunenburg High School early on Friday, but the Chargers pulled away for a 35-10 victory.

Statesmen Head Coach Mark McPherson saw the continuation in this game of an unfortunate trend contributing to the Statesmen starting the season 0-3.

“The physicality has not been there for us,” he said. “It just comes down to being physical and being tough sometimes, and we haven’t done that yet.”

After Central went up 7-0 in the first quarter, R-H tied it up after junior Tyrie Blow-Tydings ran for a 9-yard touchdown. The Chargers doubled their score, but the Statesmen kept things close in the second quarter, as a 27-yard field goal by senior John Walker made it 14-10.

But then Central went on to score an unanswered touchdown in each remaining quarter, the last score coming on a 42-yard return after a Randolph-Henry fumble.

The Statesmen defense created two Charger turnovers, with junior Aaron Crawley recovering a bad snap and junior Cedric Patrick recovering a fumble. Patrick led the team with 12 total tackles, including seven solo and 10 assisted, while Blow-Tydings had 9.5 total tackles, with six solo, including three for losses, and seven assisted.

R-H generated 235 yards of total offense, with 195 coming on the ground.

With Bluestone High School as the opponent, the Statesmen will play their first home game of the season Friday at 7 p.m.

“I think it will give us a boost,” McPherson said. “Right now, we’ll take any kind of boost we can get, so we’re just happy to be at home.”

He said this week of preparation will be all about mental toughness and increased physicality.