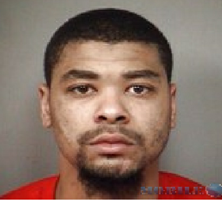 “Pursuant to a plea agreement … Mr. Eppes entered a plea of guilty,” Green said in an email, “and was sentenced to 10 years in the Department of Corrections with eight years, nine months suspended on conditions of 10 years good behavior (and) three years supervised probation upon release and payment of restitution and court costs.”

This means Eppes will spend 15 months in jail.

Green said Eppes appeared before the Honorable Kimberly S. White, who carried out the sentencing.

Charlotte County Sheriff’s Office deputies arrested Eppes in June, 10 months after his 27-year-old girlfriend, Karen Goode, was found dead from a gunshot wound. A sheriff’s report at the time indicated Eppes called the sheriff’s office from the Drakes Branch area and said his girlfriend had been shot.

Involuntary manslaughter is defined in the Code of Virginia as unintentionally causing the death of another person. It is a class five felony punishable by one to 10 years in prison and/or a fine of up to $2,500. If the court believes the defendant has shown a reckless disregard for life, the maximum prison term can be increased to 20 years.