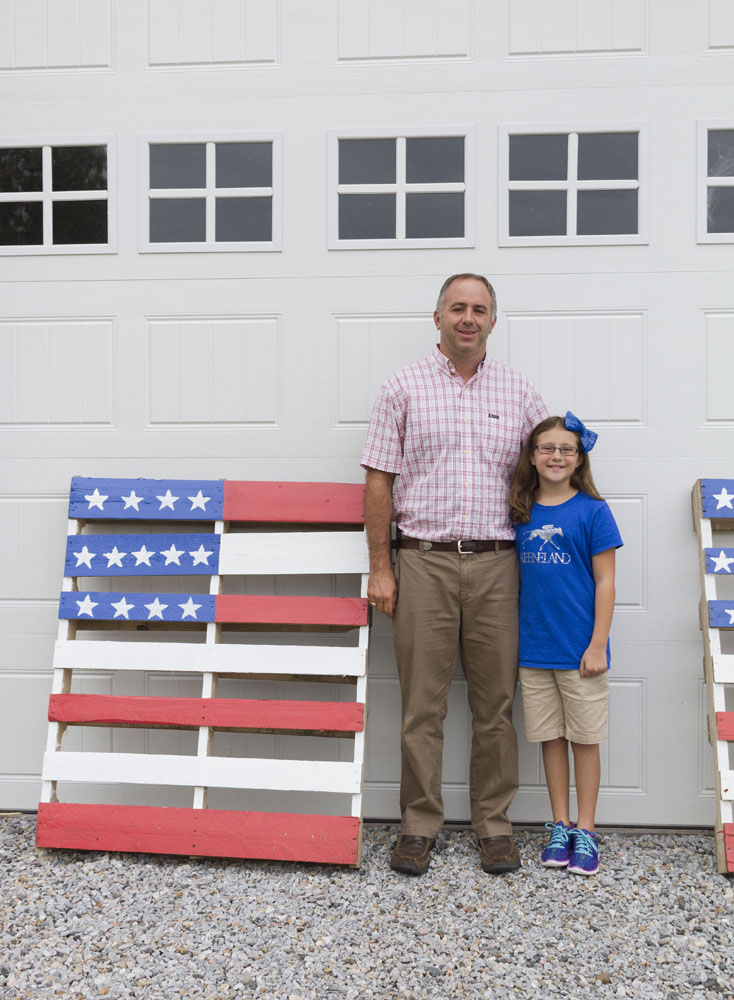 Photo by Carson Reeher Courtney Irving and his step-daughter, Rayah Edelson, stand with pallets they have painted to look like flags.

Two Prince Edward residents’ work as flag-pallet artisans began in their back yard as a craft project.

Along Abilene Road, and elsewhere throughout Prince Edward County, wood pallets painted to look like American flags can be found leaning against porches and trees.

Many of these pallet flags were created by Courtney Irving and his stepdaughter, Rayah Edelson.

Irving said he and 11-year-old would see similar pallets when driving to and from Keysville and decided they wanted to try the project for themselves.

“They did them a little differently. They just did dots for the stars,” he said.

After putting the flag at the end of their driveway, friends and family started asking the pair make more flags and sell them.

Irving said they bought too much paint when they first started out.

“Instead of buying a half quart or a quart we bought a gallon of each color,” he said.

The pair gladly complied as requests began coming, figuring, if nothing else, they could use up their buckets of paint.

“We started making them for my mom and we made a couple for my brother, and my church was having a yard sale, so we made some for that and then some people saw them and started stopping by and asking if we’d make them some,” Irving said.

They only make flag pallets for sale at the special request of customers.

How are they made? First, Rayah said, they paint the stripes.

“He usually does white and I usually do red,” she said.

Next, Irving paints the blue part. They let that dry, she said, and then come back and paint a second coat.

“Then we have little sponges … they’re pink and green. We use a sharpie and shape them into stars. We’ll sponge it in there, put that on and then let it dry,” Rayah said.

Irving paints 13 stars onto each flag.

“The reason we do (that) is I can’t fit 50 on there and I thought 13 would be like the original colonies,” he said.

Irving said he and Rayah have completed a few small craft projects before now, but never something like this.

“I think it’s pretty cool and he said we might do a new one,” Rayah said.

Her stepfather said their next project will be to create Christmas trees out of wood pallets. They bought the paint last weekend, Rayah said, but haven’t the project yet.

When not painting pallets, Irving works in the accounting department at S&M Brands in Keysville and Rayah attends sixth grade at Central Middle School. She is an avid reader and is learning to ride horses, but also likes art and craft projects.

It takes the father-daughter team about three days to complete a pallet. At one point this summer, they were working on six or eight pallets at a time, Irving said.

He said they do all the painting in the barn behind their house.