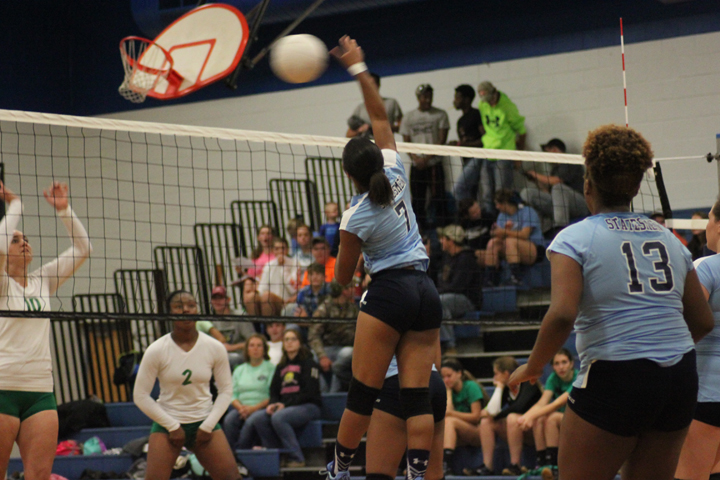 Photo submitted by Claudia McMillan Randolph-Henry High School outside hitter Cymirra Shuford, No. 7, led the team in kills last season as a junior and will be counted on as a leader this season.

The Randolph-Henry High School varsity girls volleyball team takes the court this year hoping to take the next step in the program’s development.

The 2015 Lady Statesmen made it to the Courthouse Conference 37 tournament semifinals before being eliminated by Appomattox County. Randolph-Henry finished the season with a 9-13 overall record and looks to improve its winning percentage this year.

“Our goal last year was to give ourselves a chance to win every night,” said Shep Critzer, second-year head coach at Randolph-Henry. “We achieved that goal, and our objective this year is to continue to improve and compete each day to see where that puts us in terms of this year’s competition. The girls have been working hard in the offseason to improve their skills and understanding of the game, and we are looking forward to a good season.” 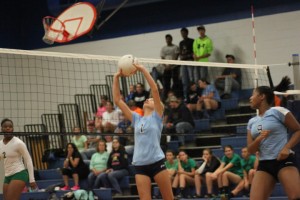 The landscape of competition changes slightly this year for the Lady Statesmen as they move from Conference 37 to Conference 34. Some foes they encounter in the James River District will now be conference mates, including Amelia County, Bluestone, Nottoway, Prince Edward County and defending state champions Goochland.

Randolph-Henry comes into this season having lost two 2015 players due to graduation — starting setter Lindsey Kunath and backup middle hitter Elizabeth Devin, who played in every match last year.

This year’s team will be a good mix of returning and new players. The setting duties will fall to senior returner Kendall Bowman and junior newcomer Hannah Pascuita.

“Kendall and Hannah have really worked hard this summer to improve their consistency and accuracy in setting, and we’re very excited to see how that improvement helps us as a team,” Critzer said.

On the other end of the team’s sets will be outside hitters Cymirra Shuford, Annie Sandridge and Anna-Grace Cary.

Shuford, an All-Conference 37 second team pick last year, led the team in kills as a junior. She is joined by Sandridge, a junior returner who played in every match for the team, and Cary, a junior who makes the move to varsity after helping lead the junior varsity team to the James River District title last year.

“We’re very excited about these three young ladies,” Critzer said. “They are all very athletic, love to compete and are tenacious defenders. They have all improved since last year, so we’re looking forward to seeing what that looks like on the court.”

A pair of returners will handle the middle responsibilities for the team. Senior Jakya Pettus will join junior Kierra Jones in the middle for the Lady Statesmen. Jones was second on the team in kills last year and received all-conference honorable mention. Pettus and Jones combined for 50 blocks.
“Both of these young ladies are hitting with more power and consistency this year, and they are both reading the game better,” Critzer said. “They should be tough in the middle for us this year.”

Anchoring Randolph-Henry’s defense in the back row will be senior returner Kimmi Horsfall, an all-conference second team selection.

Juniors Serena Barton and Anna Pascuita join Horsfall. Barton is a newcomer to the program while Pascuita will be taking to the court after a year off due to injury.

“Both of these young ladies have been great additions to the team,” said Critzer.

The Lady Statesmen open their season Aug. 29 at Nelson County at 7 p.m. and will play their home opener Sept. 1 against Bluestone at 7 p.m.