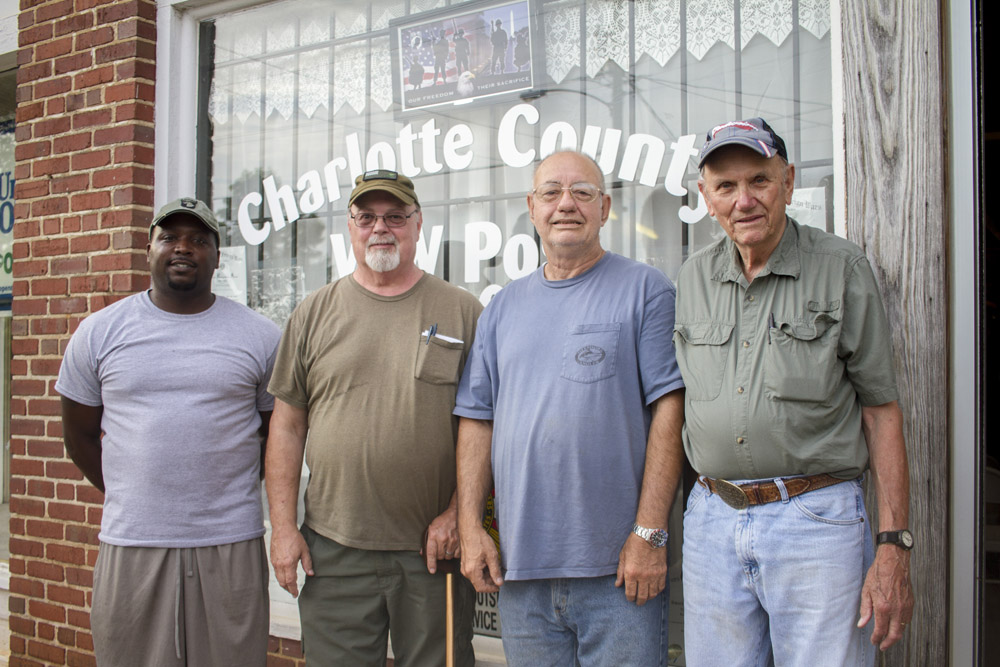 Four of the new members of Charlotte County’s Veterans of Foreign Wars Post 8902 pose for the camera. From left are, Shuntwayne Osborne, Donnie Smith, B.J. Thomas and Dick Johnson. (Photo by Carson Reeher)

Just a month-and-half ago, Charlotte County’s Veterans of Foreign Wars (VFW) organization was close to surrendering its post. In that time, with increased recruitment efforts, Post 8902 has seen a revival. Ten veterans have signed up to be members and many just attended their first meeting.

He said their recent recruitment event at Food Lion was “very positive; it was probably one of the more positive ones in a while.”

“We hope to do that again,” said Hamlett. “At least a couple more times, where we can get a number on that membership roll to be at least 50 or more.”

The new members have served in a variety of wars and conflicts, including those in Afghanistan, Iraq, Vietnam and Korea.

“We got a couple of younger guys but we still wanna increase that effort because they’re going to be the life of this organization (in) 15, 20 years from now,” Hamlett said.

“I have been affiliated with the post over the years on and off sporadically,” said Smith. “They need members and so I just decided that would be prudent in order to help them out.”

Shuntwayne Osborne, a new member, said “the VFW is an organization for veterans and … coming to meetings or being a part of an organization, it opens up opportunities for other things, I believe.”

“Camaraderie,” said Hamlett, is the organization’s key to success. “Once you’ve been in service, forming bonds, this type of camaraderie doesn’t exist in other organizations.” VFW members are involved in numerous service community centric projects, helping other veterans, area students and the community at large.

To be eligible for the organization veterans must have received a campaign medal for overseas services, have served 30 consecutive or 60 nonconsecutive days in Korea or have received hostile fire or imminent danger pay, according to the VFW website. The annual dues for Post 8902 are $33 a year.