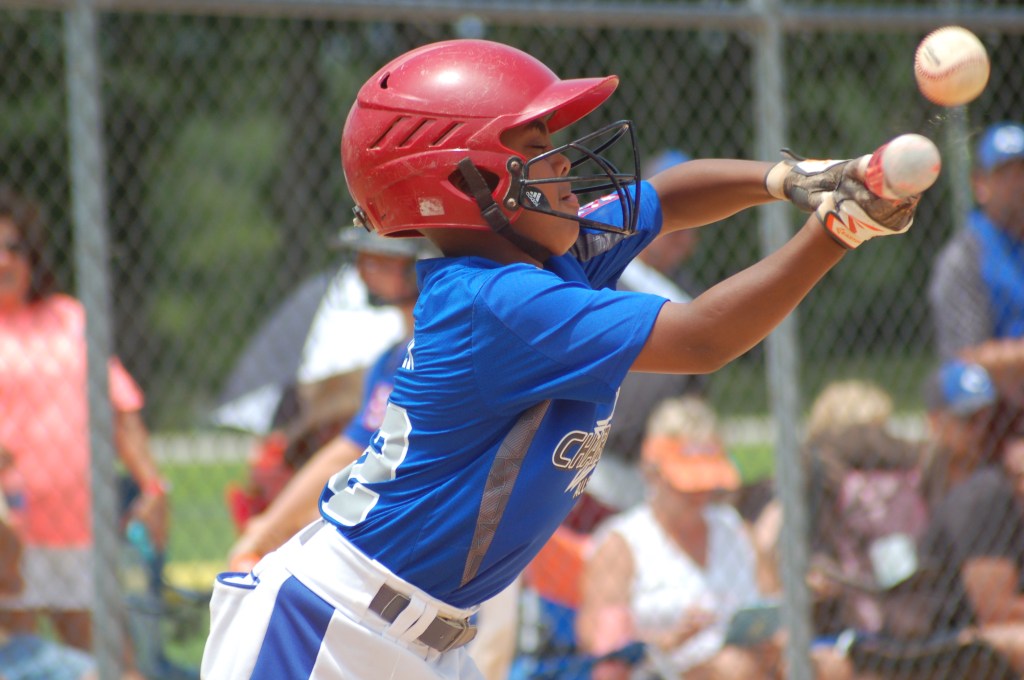 Jackson Walker, of the Charlotte County All-Stars, successfully bunts on Saturday during his team’s 8-6 victory over the Crewe-Burkeville All-Stars in the Dixie Youth District 5 Minor League All-Star Tournament in Victoria. (Photo by Titus Mohler)

The Charlotte County All-Star baseball team opened up the Dixie Youth District 5 Minor League All-Star Tournament with an 8-6 victory over the Crewe-Burkeville All-Stars in a game that started on Friday evening, was stopped due to lightning and concluded Saturday afternoon.

When played was stopped on Friday in Victoria near the midpoint of the six-inning game, the score was 2-2.

“They came back this morning, and they were ready to go,” Charlotte Manager Chris Tucker said. “They were fired up. They hit the ball. Defense stayed the same — defense is still strong. We’ve got a very strong defense for the Minor Leagues this year.”

Charlotte’s defense was bolstered by three innings of pitching from Jaylin Gordon followed by two from Kaheim Dailey and one from Kanye Dailey.

Crewe-Burkeville took a 3-2 lead after four innings, but Charlotte racked up four runs in the fifth to go ahead for good. Scoring twice in the sixth inning, Crewe-Burkeville made things interesting, but Tucker noted that Kanye Dailey was ultimately able to help put the game away as pitcher after settling down.

“All of the kids, they’re going to have a little bit of jitters here and there and everywhere, but we’ll be OK,” Tucker said. “I have full confidence in them.”

Though there were no home runs hit over the fence by Charlotte, Brayson Arrington reached in one play on errors.

The Charlotte County All-Stars face the Dinwiddie National All-Stars at 6 p.m. on Sunday in Victoria.