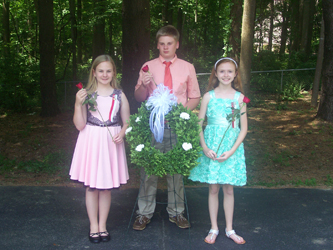 The children traveled to the Arlington National Cemetery, visiting Arlington House on Friday. They were able to view the Tomb of the Unknown Soldier and were present for the changing of the guards. Also, they became Junior Park Rangers, completing their books and receiving their badges.

Austin was awarded “Most Outstanding Boy CofC Member.” The CofC Organization is a chapter of the United Daughters of the Confederacy and they strive in historical, benevolent, patriotic, memorial and educational work. Austin met all of the criteria and was awarded this honor for the Virginia Division.

After lunch, the children participated in a Memorial Service and listened to a guest speaker who portrayed Clara Barton.