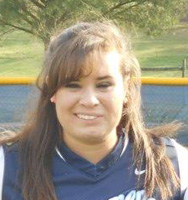 Senior Maggie Adams headlined a group of girls receiving awards for their performances this year on the Randolph-Henry High School varsity softball team.

Adams, who played shortstop, was the lone Lady Statesman to receive regional recognition, making the All-Region 2A West second team.

Adams has been named a Virginia High School League all-star, and she was runner-up in the voting for Conference Softball Player of the Year.

“Maggie is one of the most consistent hitters that has ever come through R-H,” Lady Statesmen Head Coach Deborah Laine said. “She hits for power and average.”

Adams finished her four-year varsity high school career with a .571 batting average. She produced 153 hits, including 24 doubles, 23 home runs and four triples. She had 128 runs batted in and 99 runs scored.

For 2016 team awards, she also led the way, garnering the title of Most Valuable Player.

Adams was named the Best Offensive Player on the team in her junior and sophomore seasons, and she was Rookie of the Year for the team as a freshman. In both 2014 and 2015, she was named Conference Player of the Year, first team all-district, all-conference and all-region and second team all-state. She also made the all-district first team as a freshman.

The 2016 Most Improved Player award for the team went to Devin.

“She was a big asset and help to the team,” said Lady Statesmen Assistant Coach Michael Adams. “She was a junior last year and she was a second-(string) first baseman, and she jumped right in this year (as a starter). She ended up hitting almost .400. She had like .380 for the year, so she had a big turnaround. She didn’t even bat .100 last year.”

Sophomore catcher Anna Cary was named Rookie of the Year for the team. “She came to the varsity (team) after four ballgames and stepped right in and caught the last 16 ballgames,” Adams said. “She actually had six putouts, throw outs at second base and played just phenomenal behind the plate.”

The Statesmen went 10-10 overall this season, 8-6 in the district, and their season ended in the first round of the conference tournament.