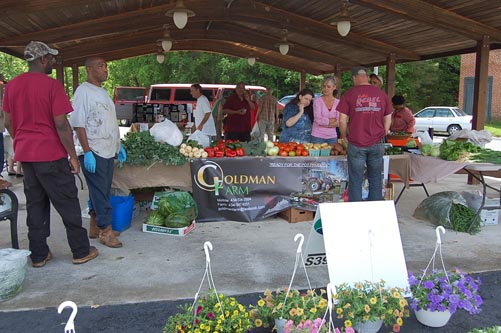 (Photo by Italia Gregory) Shoppers mingle as the Charlotte County Farmers Market at Drakes Branch kicked off on Friday at the Drakes Pavilion.

The Charlotte County Farmers Market at Drakes Branch kicked off with 287 visitors — most of which were local, at the Drakes Branch Pavilion on Friday.

“I was really excited about the turnout,” said Farmers Market Manager Brick Goldman. “We didn’t have any idea how many people were going to come, and to see the crowd of people come through, we were just amazed.”

Goldman said people didn’t just stop by the Farmers Market to look, but they purchased merchandise.

“It tells me about the need for easy access to local food,” said Charlotte County’s Agriculture Extension Agent Bob Jones. He said the initial turnout was a good indicator of interest for the market.

The market boasted a variety of produce for consumers to purchase, as well as herbal products and local beef.

“It was like a family atmosphere,” Goldman said. People gathered around, they talked to each other, it was just great.”

“I’ve had a few questions as far as additional vendors,” Jones said.

“There’s definitely room for the Farmers Market to grow.”

Jones said the market is currently seeking committed vendors with a diversity of offerings who are committed to the entire season.

The season will run through October.

He said the idea behind the Farmers Market is that people will be able to come in on a Friday and have a one-stop shop in town.

According to Jones, one of the reasons most Farmers Markets fail is due to an inconsistency of vendors.

“You’ve got to make sure there’s going to be product available,” he said.

The Drakes Branch Farmers Market is open every Friday from 10 a.m.-6 p.m. Local beef will be available from 2-6 p.m.

Interested vendors should contact Cornell Goldman at (434) 534-2504 and general inquiries should be directed to the Charlotte County Extension Office at (434) 542-5884.