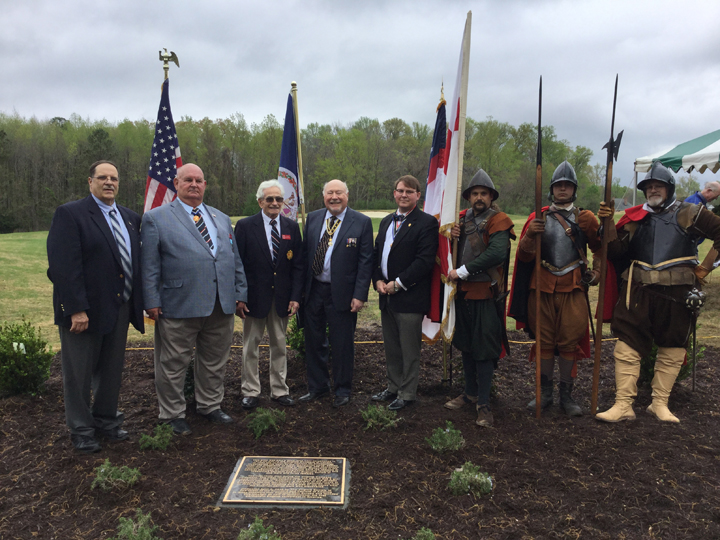 Officers of the Virginia Society of the Order of the Founders and Patriots of America and Jamestowne re-enactors gather following the dedication of their memorial plaque after the reinternment ceremony of an early Jamestowne colonist. Pictured are, from left, Doug Graves, secretary; Jerry Hubbard, past governor; Mike Lyman, past governor, Ben Fegan, chaplain and member of Two Rivers Country Club; J. Shane Newcombe, past governor and National Deputy Genealogist General; and three soldiers from the Jamestowne & Yorktown Settlement and Victory Center.

The Virginia Society of the Order of the Founders & Patriots of America recently oversaw the reinternment of one of four human remains from an early Jamestowne settlement dating from 1619 to 1622 and dedicated a memorial plaque commemorating and memorializing the occasion and location.

On Saturday, April 2, the group conducted its Spring Meeting at the Two Rivers Country Club at Governor’s Land in Williamsburg, only six miles from the original Jamestowne Fort.

Following the meeting, a graveside service and colonial period reinternment taken from the 1607 Church of England’s Book of Common Prayer was conducted for the unnamed individual.

Approximately 150 people along with nine various hereditary and historical organizations participated and paid homage to an early Jamestowne colonist who was reinterred.  Following the reinternment, the Virginia Society unveiled its bronze plaque memorializing the historic occasion and location.

All of the four human remains that were discovered were examined and relocated temporarily to the Smithsonian National Museum of Natural History in Washington, D.C. It was concluded that the English human remains were that of one male and three females. Plans have been underway for more than a year to reinter each of the individuals to the immediate area of their discovery at the Two Rivers Country Club.

This ceremony and graveside service was for one of the four individuals and plans continue to be made for the proper reinternment for the remaining three.

The settlement was originally part of the Virginia Company of London’s 3,000 acres of land set aside and apart from the Jamestowne Fort to “generate income for its investors.”

In the 20th century during the 1990s, the Two Rivers Country Club began construction of its river front homes on the James and Chickahominy rivers and the golf course.

During the initial construction, two significant colonial-era settlements were discovered. The first was a Native American village, which was later identified as part of the Paspahegh tribe, a sub-tribe of Chief Powhatan.

The second notable village of considerable colonial-era history uncovered in the planned golf course was an English village that included several buildings along with the discovery of human remains of English colonists. Archaeological research indicates that this English village and the corresponding human remains related directly to the Virginia Company of London land.

It has since been determined, through archaeological research, that this settlement was a quarantine area between 1619 and 1622, which was established for the newly arriving indentured English servants of the Virginia Company of London. The colonists were required by the Virginia Company of London to spend at least six months at this location to segregate themselves from the main body of colonists at the Jamestowne fort and to acclimate themselves to their new physical location. This was required in the hopes to limit and or prevent the spread of diseases the newly arrived colonists may have brought with them from England.

The Order of the Founders and Patriots of America (OFPA) is a hereditary organization. Founded in 1896, the OFPA is composed of “Associates,” who trace their ancestry back to those first colonists and who have forefathers in the same male ancestral line who served in the American Revolution.

Membership is open invitation to any man of the age of 18, of good moral character and reputation, and a citizen of the United States, who is lineally descended, in the male line of either parent, from an ancestor who settled in any of the original 13 colonies now included in the United States of America prior to May 13, 1657; and one or all of whose intermediate ancestors in the same line, who lived in the period of the American Revolution from 1775 to 1783, adhered as patriots to the cause of the colonies, shall be eligible for membership in the Order.

The OFPA is broken down into constituent or state societies.  The Virginia Society OFPA meets more than twice a year at varying locations throughout the commonwealth to honor, pay tribute and commemorate the early founders and patriots of our nation. Wreath-laying ceremonies and services along with guest presentations, lectures and programs are held.

The focal point of this national historical site was the dedication of the memorial bronze plaque and granite base donated by the Virginia Society of the Order of the Founders and Patriots of America. J. Shane Newcombe a native of Randolph and past governor of the Virginia Society and currently a National Officer of the Order, spoke during the dedication providing insight on his 10th great-grandfather James Allen, who arrived at Jamestowne in 1608.

His mother, Virginia (Jenny Lou) Allen Newcombe, also participated and acted as a witness to the fact that the Allen family of Virginia has taken a vital role in the founding of the nation for 408 years.

It is the hope of the Virginia Society that the reinternment of the three remaining individuals will take place in the coming year through the assistance of the Smithsonian Institute.

Church and Community events for the week of Dec. 1

Church and Community Events for the week of Nov. 23

Church and Community Events for the week of Nov. 16