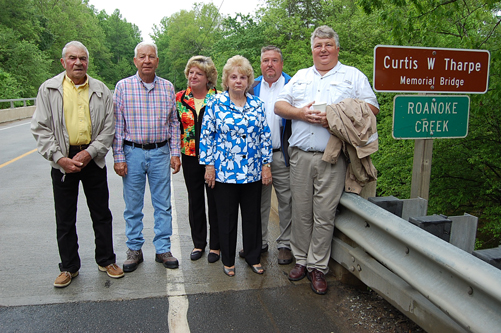 The Charlotte County Board of Supervisors held a memorial bridge dedication ceremony Tuesday in conjunction with the Virginia Department of Transportation, naming it in memory of Curtis W. Tharpe.

Friends and Tharpe family members, as well as local government officials and law enforcement, were in attendance to honor the memory of an accomplished businessman and community member.

“I appreciate all of you being here this morning,” said Board of Supervisors Chairman Haywood Hamlet.

The structure, formerly known as the Roanoke Creek Bridge, is located on Scenic Byway Route 47 adjacent to Tharpe’s family home and adjoining property.

“This day is something that we’ve been working on to do for some time,” Hamlet said. “I feel like he’s still with us today, looking down on us.”

Hamlet said at the time when the first plans were conceived to name the bridge, Tharpe was still living.

The initial decision to rename the bridge was made in December, however, Tharpe, 71, died on Thursday, Feb. 18, after an almost two-year battle with amyotrophic lateral sclerosis (ALS).

In March, supervisors passed a resolution overriding the previous one requesting to name a portion of Virginia Scenic Byway 47 as the Curtis W. Tharpe Memorial Bridge.

“Curtis was a mighty good man,” Hamlet said. “He did a lot for Charlotte County. He was a hard worker, raised a good family and … he didn’t mind work.”

Tharpe was a lifelong resident of Charlotte County and operated several businesses which provided employment to many people, including BMC Rock Quarry and Curtis Tharpe Trucking. “For that, we are thankful,” Hamlet said.

The resolution stated that the county would assume responsibility for the costs associated with making and installing all signage for the bridge.