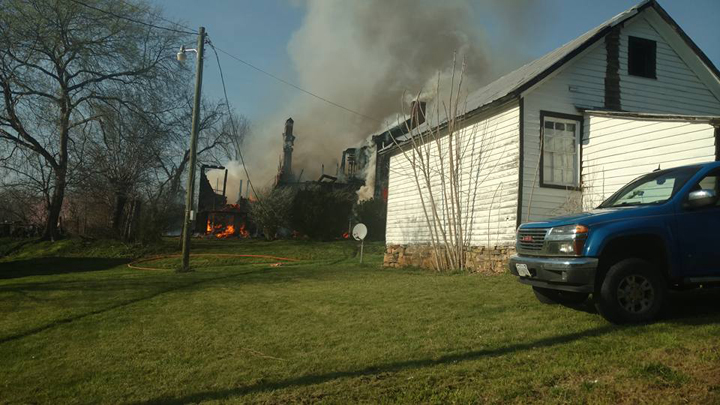 (Photo by the Darlington Heights Volunteer Fire Dept.) A house fire in Red House sparked a nearby brush fire on Thursday, March 24.

Donations are being accepted for the victims of a Red House house fire that caused seven fire companies to respond to Tower Road on March 24.

Reeves said the owners of the home were not present when the fire started, and the call came in from a passerby.

When units arrived on scene, Reeves said that due to the heavy amount of fire located in the rear of the home in conjunction with high winds, firefighters were not able to enter the home to carry out an interior attack. Instead, defensive tactics were performed, which consisted of flowing water from the outside.

Reeves said that a seven-acre brush fire spread to an adjacent property as a result of the fire and high winds — which prompted the issuance of a red flag warning.

According to the National Weather Service, “a red flag warning means that critical fire weather conditions are either occurring now or will shortly. A combination of strong winds, low relative humidity and warm temperatures can contribute to extreme fire behavior.”

Reeves said some of the units on scene of the house fire also helped to contain the brush fire.

The American Red Cross provided assistance to the family, he said. Reeves said fire departments were on scene for five hours, and the blaze is under investigation by Virginia State Police.

Anyone wishing to make donations in light of the family’s recent loss may contact the Red Cross or donate items directly to the Red House Volunteer Fire Department. Fire department donations may be received at 9467 Red House Road, Red House, Va., 23963.