A back room lunch with the supervisors

Editor’s note: The Charlotte County Board of Supervisors are referred to by their districts in this column. The column refers to Gary D. Walker as A, Warren E. Weston as B, Garland H. “Butch” Hamlett Jr. as C, Robert L. “Butch” Shook Jr. as D, Nancy R. Carwile as E, Haywood J. Hamlet as F and Royal S. Freeman as G.

I have heard rumors that the Charlotte County Board of Supervisors meets regularly behind closed doors for lunch before board meetings.

However, I believed the county administration and board abided by the Freedom of Information Act, Code of Virginia (FOIA) which requires that public business must be done in public (no back room deals enabling public voting in unison).

Not relying on rumors, I arrived at the county offices on Jan. 12, at 12:10 p.m. prior to board meeting at 1:30 p.m. I saw two vehicles parked in front with vanity plates belonging to supervisors A & D. (For brevity letters are used to refer to supervisors’ districts.)

I asked to speak to the county administrator who said they were only having lunch since more than two members together is a public meeting. I was escorted to the back room and waited. Supervisors had disappeared but soon returned with a full plate of fine looking barbeque (except C waited in public Board room). Soon, E and G arrived and had lunch.

I did not eat.

How many tax dollars go for supervisors’ lunches? The table below lists invoices provided by the county for 9 of the last 13 months.

I believe a prearranged meeting in the county offices with lunch paid by the county behind locked doors prior to a board meeting should be a public meeting. The Code of Virginia requires the board to give notice of the date, time, and location of all public meetings, and this was not done for lunches.

While closed sessions are allowed under FOIA, there is a required procedure which was not followed for lunches.

Should the county pay for supervisors’ lunches? Do secret lunches give the appearance of the board making “back room” deals?

Had a deal been made prior to the January meeting where supervisors ignored public comments to quickly approve the courthouse report with its factual errors? Are a couple of voices in closed meetings controlling the board?

Could all open meetings help the voard listen to the public on future issues like funding for safe elementary schools? Come to the next board meeting on Tuesday, at 1:30 p.m. and ask your questions, but eat lunch first. 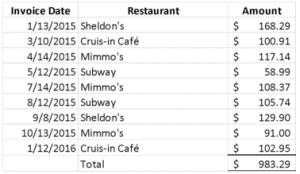 A report, supplied by the Charlotte County Administrator’s office, depicts nine month’s worth of meal expenditures.

You can contact your supervisor directly if attending a 1:30 p.m. meeting requires missing work. Citizen involvement can bring about change.

Terry Ramsey is a guest columnist and a 1967 graduate of Randolph-Henry High School and a resident of Charlotte Court House. He can be reached at Terrill.Ramsey@outlook.com.