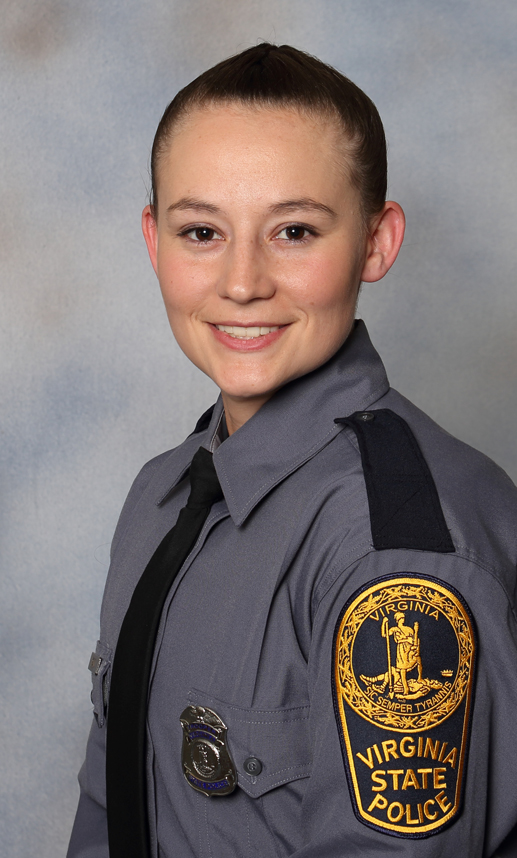 Mann was among 74 new troopers honored during Friday’s ceremony at the State Police academy in North Chesterfield.

According to Mann, she started her probationary period on Feb. 25. and began the academy on June 29. “Probate was three weeks followed by an FTO [field training officer] phase of 14 weeks,” she said.

Finally, Mann was required to complete a 28-week academy session at the North Chesterfield location.

According to State Police, “The probationary phase requires trainees to complete two-and-a-half weeks of introductory training at the academy before being assigned to a Field Training Officer (FTO). The new troopers have received more than 1,600 hours of classroom and field instruction in more than 100 different subjects, including crime scene investigation, survival Spanish, judicial procedures, self defense, cultural diversity and firearms.”

Mann completed her probate session in Charlotte County and will commute to work in Appomattox County for her first assignment. She will begin work on Jan. 19.

“I’ve always wanted to do law enforcement,” Mann said. “My brother, Tom Reeves, joined the department in 2011 and I decided to follow in his footsteps versus a local department.”

The release stated that many of the new troopers entering the academy had prior law enforcement experience with other agencies.

Mann said she worked at the Charlotte County Sheriff’s Office before deciding to pursue a career with the Virginia State Police. She said it was an amazing experience, however, she “just wanted a department with more opportunities, and the state has that.”

Mann is a 2007 graduate of Randolph-Henry High School and the daughter of Janet and Thomas Reeves.

Mann and her husband, Jayme, have two children, Jaydan and Madalynn Mann.