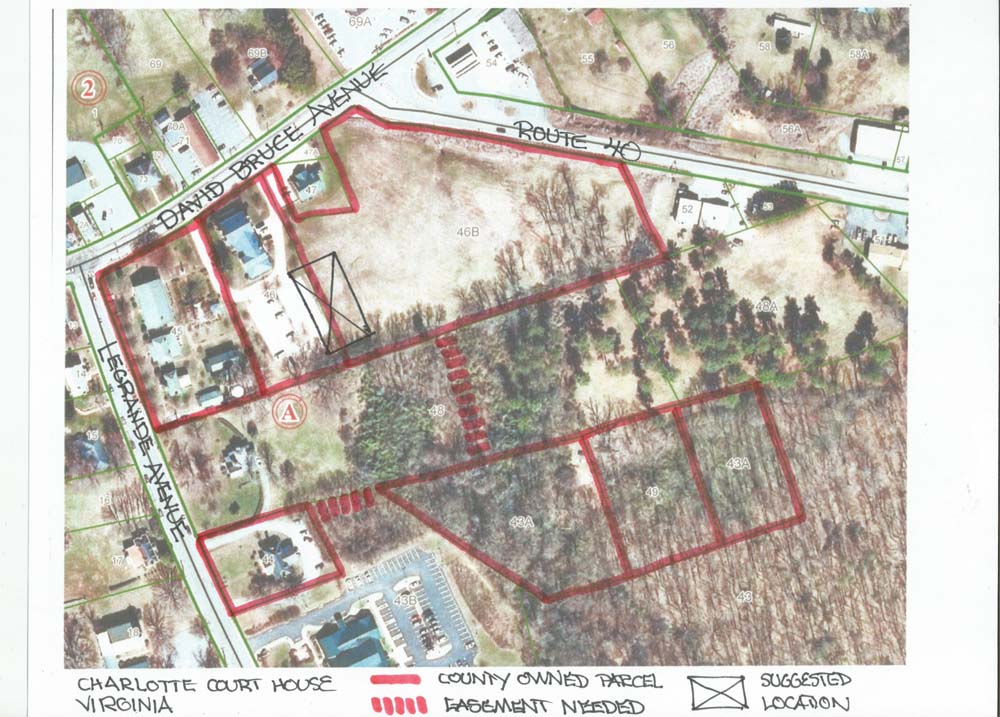 An aerial photo indicating the suggested courthouse location, along with parcel numbers and boundaries. A black “X” indicates the suggested location of the proposed courthouse, while solid red lines indicate parcels owned by Charlotte County. The entrance and exit to the new courthouse facility would be accessed from David Bruce Avenue directly between the Bank of Charlotte County and existing circuit court clerk’s office. Areas within red broken lines depict parcels that would need to be acquired in order to access the new courthouse from Legrande Avenue.

Proposed construction plans and the location for the new courthouse facilities in Charlotte County have been deemed inappropriate by the Virginia Department of Historic Resources (DHR).

In a letter to Charlotte County Administrator R.B. Clark, Julie Langan, the director of DHR, said, “since the inception of this project, it has always been DHR’s view that it is both unnecessary and inappropriate to sacrifice historic buildings or the integrity of the setting within which they are located.”

The most recent proposed plans for the new courthouse facility depict a three-story structure located behind and connected to the existing circuit court clerk’s office in the existing parking lot.

Charlotte County Board of Supervisors Member Gary Walker contends that a court order is in place commanding the board to build the new courthouse facilities on the courthouse square.

Local resident Pamela Kent Pettus said, in an email to The Gazette, while the April 27, 2015 court order from Judge Designate Robert Doherty supports the new courthouse being built on courthouse square, the order also allows for mutually agreed modifications without the approval of the court.

“If the current plans are built, the height and width proposed addition to the clerk’s office will overwhelm, not only that building, but the entire courthouse square,” Pettus said.

Walker said no additional plans have been formulated utilizing these features “because the judge told us we can’t build it there.”

Walker said parcels of land were originally purchased in 1996 to obtain the property for the clerk’s office. In light of this, a fireproof records room was added onto the existing historic clerk’s office. Initially, Walker said, the county did not plan to purchase the land specifically with building a courthouse in mind.

Walker said most of the additional land towards the slope was planned for parking areas at the courthouse complex.

“Although the revised plans represent a vast improvement over earlier designs that included the demolition of historic buildings, a large addition to the historic courthouse and the loss of historic open space, the current plan still fails to take full advantage of the opportunities presented by the site,” Langan said. “DHR strongly recommends that the new construction be located further east toward the slope of the hill so that its impact on the integrity of the historic setting is minimized.”

Walker said the area towards the slope is a wet area, with large amounts of water running in the across the land into a drainage area.

According to County Purchaser and Planner Monica Elder, because of the detailed amount of information involved in the process, the courthouse committee did not have enough time to compose a press release for today’s issue of The Gazette, but plans on issuing a full response.