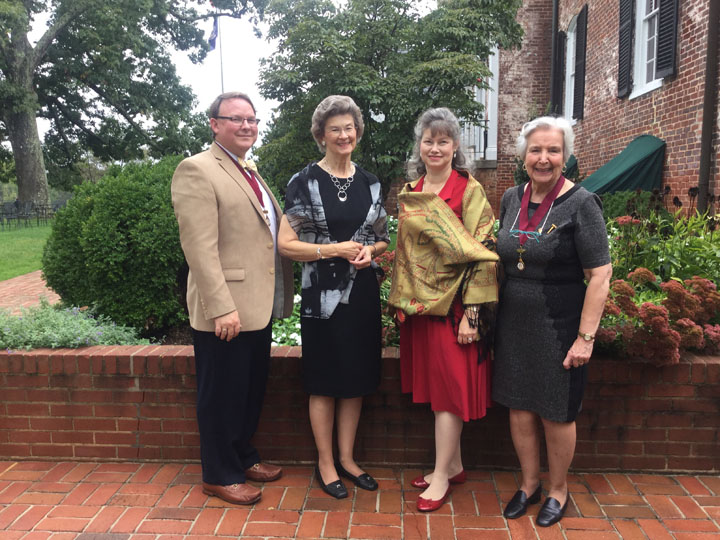 Following the meeting, the officers and guest presenter paused for a photograph. Pictured are, from left Governor J. Shane Newcombe; historian and guest presenter Nancy McMurdo; Secretary Brenda Graves and Lt. Governor Vernette Nichols. April Miller is not pictured. Newcombe is resident of Scuffletown, and traces his ancestry back to Jamestowne through both his mother, Jenny Lou (Allen) Newcombe as a lineal descendant of Col. Thomas Ligon, House of Burgesses; and his father David W. Newcombe as a lineal descendant of Christopher Branch, House of Burgesses.

The Virginia Piedmont Company met at the Boonsboro Country Club in Lynchburg recently for its Fall 2015 biannual meeting. J. Shane Newcombe, of Scuffletown, took part in the event.

The Jamestowne Society, headquartered in Richmond, is a hereditary society that admits members by invitation only and in accordance with the society’s by-laws.

The following criteria is used in determining membership eligibility: the Jamestowne ancestor was a stockholder in the London Company or Virginia Company; owned land on Jamestowne Island or lived on the Island prior to 1700; or was a resident of Virginia at the time of the 1624-25 Muster; served as governor, secretary, treasurer, attorney general, clerk of the general court, member of the council or member of the House of Burgesses prior to 1700.

The society is broken into companies throughout the 50 states and an annual meeting is held in Williamsburg each May.

The Virginia Piedmont Company encompasses “Southside and South Central Virginia,” from Charlottesville, in the north, to Danville in the South, to Lynchburg in the west, and Farmville in the east, and meets twice a year: in the spring and in the fall.

The company also continued with its tradition of having “one of its own” present a program about their family, lineage, and Jamestowne connections during the fall meeting. This year’s guest presenter was Historian Nancy McMurdo of Charlottesville. McMurdo provided an in-depth and delightful look into the lives and journeys of her ancestors, Abraham Peirsey and Robert King Carter.