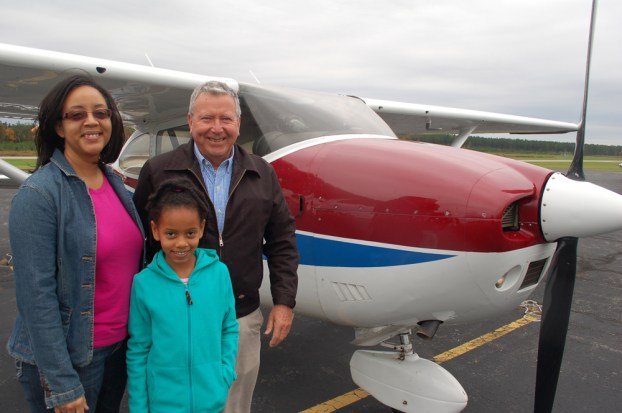 (Photo by Jordan Miles) Shena King, left, and her daughter, Tama’ra, pose with Charlotte County pilot Gerry Watts before flying over Farmville in his Cessna.

Children from the Heart of Virginia spread both their imaginations and wings recently during the Farmville Experimental Aircraft Association (EAA) chapter’s Young Eagles program, offered at the Farmville Regional Airport at Newman Field in Cumberland.

The EAA program allows children between 8 and 17 to take to the skies and learn about aviation from EAA volunteer pilots. Pilots not only take the children into the air — many for the first time — but also teach them how an airplane works, how it’s built and how it flies through the air.

Accompanied by The Gazette, Charlotte County pilot Gerry Watts was one of the local pilots who took children into the air in his Cessna 182.

Eight-year-old Tama’ra King, of Farmville, was one of the many children who ventured into the wild blue yonder on a recent Saturday morning. King, a fourth grader at Prince Edward County Elementary School, had never stepped foot in an airplane before, much less ascend over 2,000 feet into the sky.

Tama’ra, along with her mother Shena, were flown by Watts over Farmville along Price Drive, to Hampden-Sydney College, Sandy River Reservoir and High Bridge before returning to the airport.

“We’ve been doing this a right good while,” Watts said after landing his plane. He said he gets a lot of satisfaction of taking children into the air. “Particularly the ones that like it,” said the pilot, who’s been flying since 1968.

Accompanied by The Gazette, Tama’ra hung tightly to her mother as she peered with amazement through her small window down onto her school and large farms that surround Farmville.

King said she was nervous before she boarded the small airplane. “I was still a little scared,” she said, noting that she had fun. “It makes you feel like a giant,” she said of her temporarily increased height. “We found the movie theater though and my school. We found those two things.”

Her mother said the program was very nice, adding, “It gives them a different perspective obviously over their town. It lets them possibly pull out some new interests,” Shena said. She said it was a great way of getting children over a fear of flying. “It’s a nice introductory for that.”

Since 1992, more than 1.9 million Young Eagles have enjoyed a flight from EAA’s network of volunteer pilots. “For many, it was the start of their journey to becoming a pilot, aircraft mechanic, air traffic controller or many other career possibilities,” the EAA’s website stated.

The Young Eagles program began in 1996 in Farmville. Over 20 pilots are involved in the program now.

“Just to bring it to the attention of young kids, especially those interested in flying,” said Jim Farrows, the local Young Eagles coordinator of the program. “Maybe get them interested and one of these days take lessons.”

“We try to teach them about what makes the airplane fly … When we take them up I let them fly the airplane. It gives them an interest in it,” Farrow said. He’s been flying since 1953.

“We really are small when you think of it from up here,” Dunnavant said while flying the airplane alongside Jon, both speaking to each other through headsets.
“I wish I could do this everyday,” Spencer said as he navigated the airplane through the air above Farmville with Dunnavant by his side.

The high schooler described the experience as great as he flew through the clouds into blue sky.

DMV warns of rain and leaves

Fall is a time of cooler temperatures, beautifully colored trees and perhaps a less-than-perfect drive. Changing weather is just one... read more