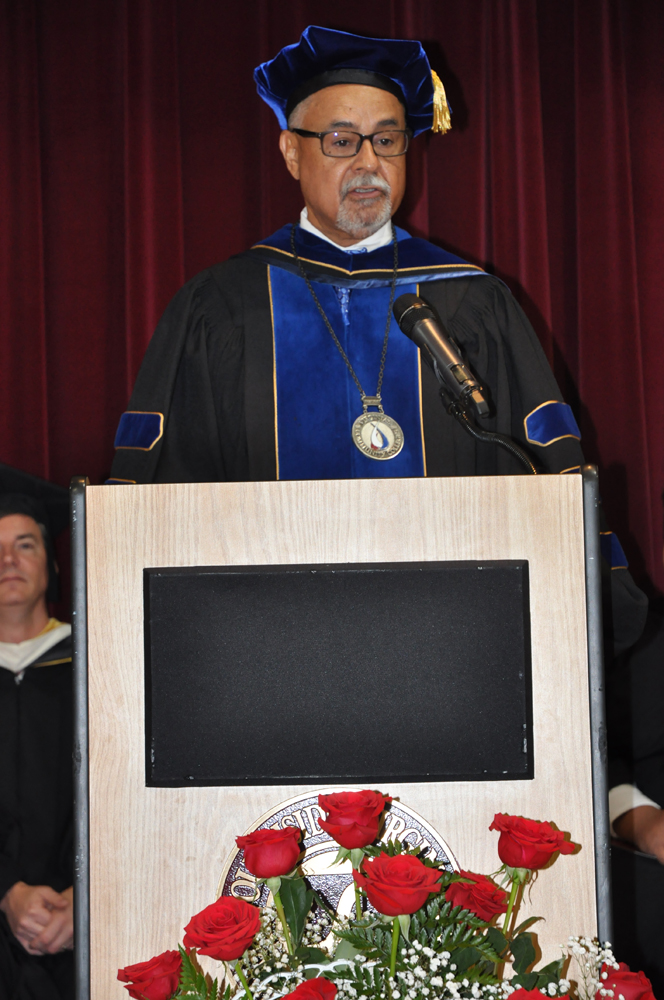 Dr. Alfred A. Roberts was inaugurated as the fifth president of Southside Virginia Community College (SVCC) on Friday at the John J. Cavan Workforce Development Center in Alberta.

“We, the college community, are excited to have Roberts as our college president, our advocate, our friend and our mentor,” said Vice President for Academic and Student Affairs Dr. Tara Y. Carter, welcoming the audience.

Roberts was officially named president of the college on Aug. 1, 2014. According to SVCC, he earned his Bachelor of Arts in mass communication from Michigan State University.

Roberts went on to earn a Master of Education degree in educational media from Virginia State University and received a Doctor of Philosophy degree in community college leadership from Old Dominion University. In addition, he has over 40 years of experience in education and community service.

Robert F. Pecht III, the president of the college’s foundation, said, “We at the foundation are optimistic, enthusiastic and excited about the future of SVCC under the guidance and leadership of Dr. Al Roberts.”

According to the college, Roberts began his career at SVCC in 1995. Throughout the years, he has held several positions within the college, including dean of off-campus instruction, vice president for workforce services and continuing education and provost.

“The voluntary faculty turnover rate is only four percent a year [at SVCC]. For staff it’s less than seven percent a year,” he said.

In addition to a host a colleagues, students and delegates, his family, who provided special remarks on the momentous occasion, joined Roberts.

Daughter, Lauren Roberts Haire, and sons Scott Roberts and Ross Roberts reflected on their father and the significant values he instilled in them over the years.

Dr. Glenn DuBois, the chancellor of Virginia’s community college system, said Roberts was selected as the president of SVCC from a national search with dozens of candidates.

“It is a pleasure to fulfill my formal part of the program and pass along to you the traditions and the symbols from the office of the college president,” he said.

DuBois said traditionally the gavel and the medallion are passed along, however, he would choose to also pass along a blank journal as a symbol of the unwritten success story of Roberts’ presidency.

According to Roberts, more than 7,000 students enrolled in Southside Virginia Community College last year. Over 200 of those students participated in dual enrollment programs at area high schools.

He said that future plans include the establishment of a power line worker training program and a physical therapy assistant program to meet growing demands.

“Much has been accomplished here at Southside,” Roberts said, “But there is still much more to do.”