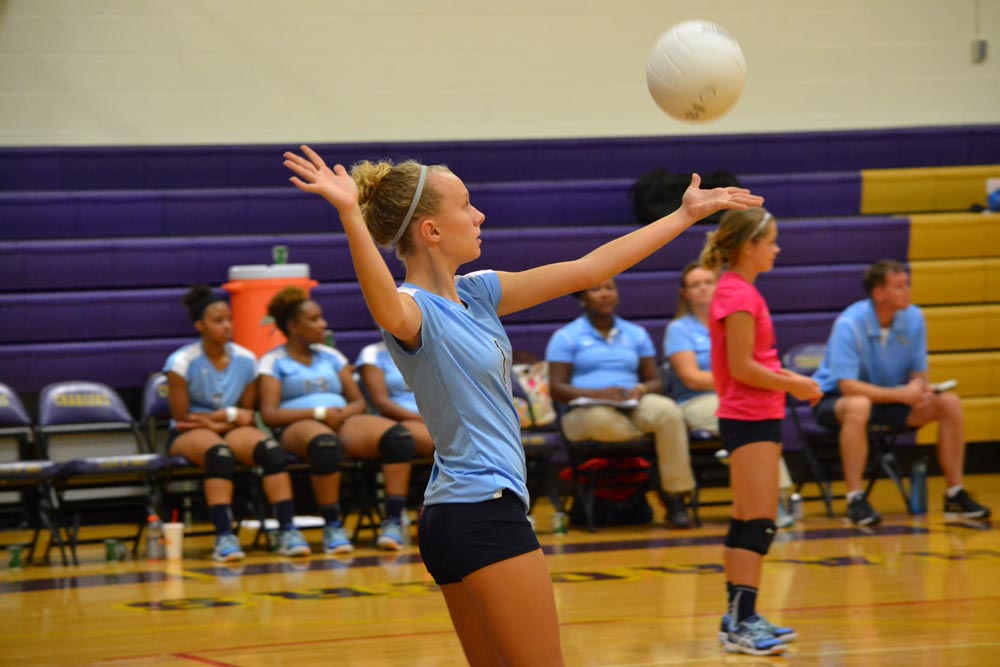 The Lady Statesmen traveled to Lunenburg last Thursday to go head-to-head with the Chargers. The Statesmen shut the Chargers out 3-1 with sets of 25-17, 25-18 and 25-18.

“It was a good win. Lunenburg plays hard, so we knew it was gong to be a battle,” Statesmen head coach Scott Critzer reflected on the outcome. “I thought we had played pretty well in the first two matches of the week against Appomattox and Nottoway and come up short, so I was happy that we kept up that level of play on Thursday.”

The Statesmen team was led by a hot-handed Lindsey Kunath who had six aces in the game. As a team Randolph Henry tallied a total of 21 aces in the three-game contest against Lunenburg.

Cymirra Shuford had six kills on 20 attempts on the night, while her teammate Annie Andridge added five kills on 13 attempts. Jakya Pettus helped the Lady Statesmen offense with four kills of her own. Liz Devin collected three kills.

On the defensive side of the court, Randolph Henry’s Kimmie Korsfall led way with six digs.

During the previous week, the Lady Statesmen went 2-1 with a pair of JRD wins. After losing to Parkview 3-1 on Monday in a non-district match, Randolph-Henry rebounded the following night with a 3-2 road win over Prince Edward. Despite four kills from Randolph-Henry’s Jakya Pettus, Prince Edward took the first game 30-28 and went on to win the third 25-20.

Randolph-Henry secured the second and fourth games 25-16 and 25-23, though, to force a deciding game. In the fifth game, the two teams battled to the very end before the Lady Statesmen finally closed the match 15-13.

After the big win over Prince Edward, the team returned home on Thursday to face JRD and Conference 37 foe, Buckingham. Paced by five team aces, Randolph-Henry picked-up where they left off at Prince Edward with a 25-16 win in the match’s opening game.

Buckingham captured the second game 25-16, but the Lady Statesmen righted the ship with a 25-13 win in the third and a come-from-behind 25-21 win in the fourth to secure the match.

Last Monday, Randolph-Henry hosted Appomattox in a Conference 37 showdown. Led by eight kills from Kierra Jones, five aces from Lindsey Kunath, and a combined 25 digs from Cymirra Shuford and Horsfall, the Lady Statesmen played the Lady Raiders tough, winning the first game 25-21 before dropping the next three 27-25, 25-12, and 25-23 for the 3-1 loss.

Nottoway edged the Lady Statesmen the following night 26-24 in the first game, but Randolph-Henry evened things with a 25-21 win.

Nottoway would pull ahead in the fourth with a late run to earn a 25-21 win of their own and then close the match out, taking the last game 25-17.

The Lady Statesmen will face Goochland on Thursday at 7 p.m. in the Central Middle School gym.