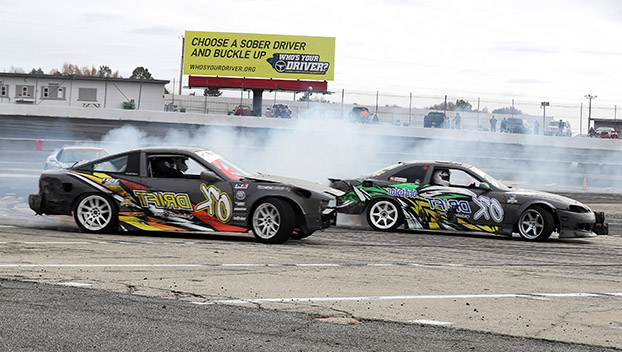 A fun event for everyone.

That is the best way to describe Saturday’s SoBo Drifts presented by Barlow’s Tire at South Boston Speedway, the speedway’s final spectator event of 2022.

South Boston Speedway’s second-ever drifting event, featuring a new, faster course that included portions of the oval track, presented a different challenge for drivers and put spectators in the viewing areas closer to the action. A Trunk or Treat held during a mid-afternoon break was a big hit with kids.

“It was a fun way to end our 2022 season,” remarked South Boston Speedway General Manager Chase Brashears. “The participants enjoyed the new course and being able to use portions of the oval track. It allowed for more speed, and spectators liked being closer to the action. The kids had fun at the Trunk or Treat. We thank everyone that helped us put on the event. We appreciate the support of our sponsor, Barlow’s Tire of South Boston, Virginia, the participants, and the spectators that came out to enjoy the event.”

Matt Young of South Boston, one of the event’s organizers and a participant, said it was a great event with close to 30 drivers taking laps on the course that snaked through the infield area and portions of the oval track.

“It was a good, fun event, the weather turned out well, we had a great turnout of drivers and a good crowd,” Young remarked. “Everybody had a great time. The course was great. I saw all smiles. I’m super happy with the turnout and the way things went.”

DyQuan Harris of Nelson, another of the event’s organizers and a participant, echoed that sentiment.

“This course is definitely better than the previous one. From the comments we have gotten from the drivers there is more on-course drive time than last time. A lot of people are really liking this layout. “This event hadn’t ended, and people were already asking me when the next one is,” he added.

“As we continue to do these events, I think the turnout will be bigger each time.”

South Boston, Virginia native Chad Campbell said the new layout was an improvement and offered something for beginner and experienced drivers alike. “This course was a great improvement from the one in the spring,” Campbell pointed out. “We were trying to give the fans a good view of the drifting action, and I think that was another part of it that made this course a good improvement.”

Campbell said it was great to have a drifting event at South Boston Speedway.

“This is my hometown, so it means a lot to me to be able to drift here at my hometown track,” Campbell said. “I hope this event does well enough that we can come back. It (South Boston Speedway) is an awesome facility, and the staff has been great. I can’t thank them enough and I can’t thank Brian Cheever and Barlow’s Tire enough for helping put this event on and sponsoring my car.”

The latest news and updates from South Boston Speedway are available on the speedway’s website, southbostonspeedway.com, and through the track’s social media channels. Information may also be obtained by phoning the speedway at 434-572-4947 or toll free at 1-877-440-1540 Monday’s through Friday’s during regular business hours.