Juneteenth: A celebration of freedom 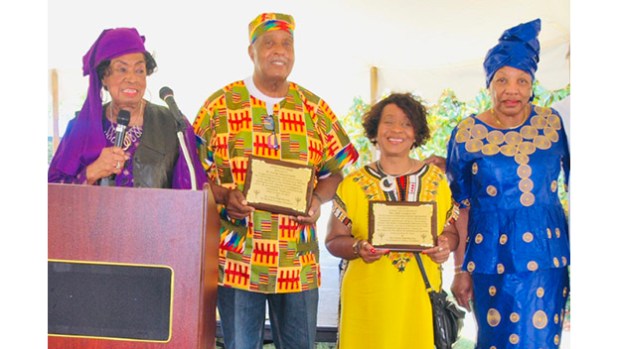 Dr. Hezteine Foster, president of Centra High Museum Inc., is shown presenting Outstanding Service Awards to George Smith and posthumously to Ruby Gee, former educator and activist, for her service. It was received by Denita Dupee, representing the Gee family. Thelma Jones was the mistress of ceremonies. Not pictured, Dr. Hester Jones also received an award for her outstanding service. (Photo by Denali and photo description written by Dr. Yemaja Jubilee) 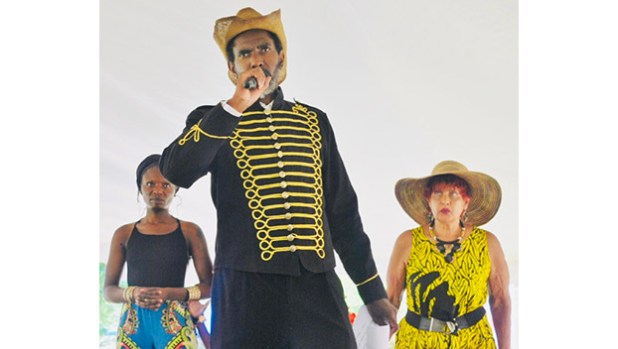 Poetic reenactment featured events on Juneteenth entitled, “JuBa, JuBa, Jubilee, We are Now Free,” written and directed by Dr. Yemaja Jubilee. On the stage with Professor L. Roi Boyd as General Grange (Professor Boyd played Abraham Lincoln) are Torian Jones vocalist/actress and Dr. Yemaja Jubilee, the narrator. The crowd enjoyed the poetic words and superb acting and singing. Jones ended the celebration with the debuting of a song she wrote especially for the event. (Photo by Denali and photo description written by Dr. Yemaja Jubilee) 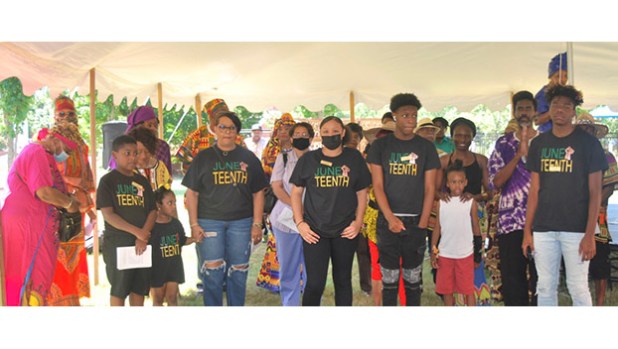 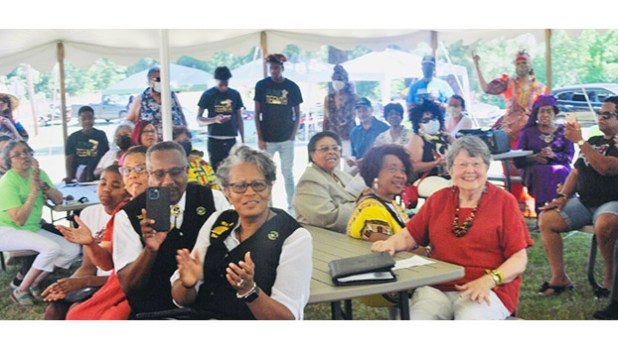 An excited crowd enjoys the music of Pastor Derek, “The Change Man” Smith, as he sings, “Hush (Somebody is Calling my Name)” and “A Change is Gonna Come.” Additionally, celebratory music was provided by deejay Al B. Among the participants were County Administrator Dan Witt and Charlotte County Public Schools Superintendent Robbie Mason, along with former members of the Charlotte County Board of Supervisors. St. Andrews Church pastor the Rev. Maurice Finney officiated and presented community professionals who all addressed the excited people. Local poet Catherine Jackson and Arlene Nelson with Southside Virginia Buffalo Soldiers Motor Club conveyed their excitement with high enthusiasm through historical facts about being a part of this Juneteenth celebration. (Photo by Denali and photo description written by Dr. Yemaja Jubilee) 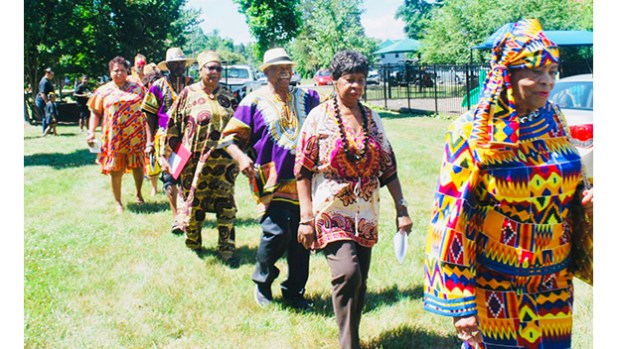 African Americans celebrate Juneteenth to commemorate the end of enslavement and to commemorate freedom expressed through ceremony, music, education and food, with a reenactment of that moment in history. It took two and half years for the news to reach Galveston Texas on June 19, 1865. On Saturday, June 18, Central High Museum Inc. sponsored its first-ever Charlotte County Juneteenth Celebration, along with Dr. Yemaja Jubilee as co-producer. After libation was poured, the freedom processional accompanied by African drummers as they merrily walked into the tent, led by Dr. Hezteine Foster, George Smith and many of the program participants. (Photo by Denali and photo description written by Dr. Yemaja Jubilee)

On Saturday, June 18, the Central High Museum commemorated its first Juneteenth celebration with an audience of more than 100 attending. The songs of praise presented by Pastor Derek Smith echoed the celebration of freedom. With the libation powerfully done by Professor L. Roi Boyd III, one felt that you were being called by our African forbearers to begin the celebration. The sounds of the African drums played by Khi Felder and his 12- year-old nephew rang with a rhythmic beat as the program participants marched in the processional with their African colors aglow.

Dr. Hezteine Foster explained the purpose of Juneteenth, which is the formal independence for all blacks from slavery. When President Abraham Lincoln had stated the slaves were to be set free under The Emancipation Proclamation in April 1863, the 250,000 slaves in Galveston, Texas did not know this, but their slavemasters did. They wanted to prolong the inevitable — having to let their free labor go. So Gen. Gordon Grainger a Union soldier, was commissioned to carry the news to Galveston to let the slaves there know they were free — all

of them. The performance of the skit “Juba Juba Jubilee” written, directed and narrated by Dr. Yemaja Jubilee, made you feel that you were there during that momentous occasion. With stellar castmembers Torian Jones, her young son, Professor L. Roi Boyd III, Khi Felder and Khi’s nephew, Dr. Jubilee explained in her powerful narration how our forbearers suffered the atrocities of slavery being treated like cattle that the slavemasters could bend to their will. The haunting and mesmerizing songs sung by Jones echoed the voices of African Americans plight of bondage that would soon give birth to freedom. Professor Boyd III’s portrayal of President Lincoln and General Grainger solidified the culmination of Juneteenth, which was ordained by God. Furthermore, the White Oak Grove youth gave a soulful song of praise that reinforces why we celebrate Juneteenth.

In addition, we heard from various community leaders about their careers and why they chose them. They encouraged the youth and older adults to follow their passion which could include entering a career that was represented at the celebration. Moreover, we were reminded to keep our faith in God and surround ourselves with the support of our family and caring friends. Also, these leaders offered their assistance if anyone needed it. The program ended with the Juneteenth song sung with power by Jones of why we as African Americans and as one nation under God celebrate the freedom which is Juneteenth.

The Central High Museum hopes the Juneteenth celebration will be commemorated each year and grow in attendance. As always, we invite you to bring your youth to events such as these and tour the museum so they can learn and appreciate the fight for freedom.

Judy Moore lives in Wylliesburg and can be reached at v5agabond2@gmail.com. She is a tour guide with the Central High Museum.