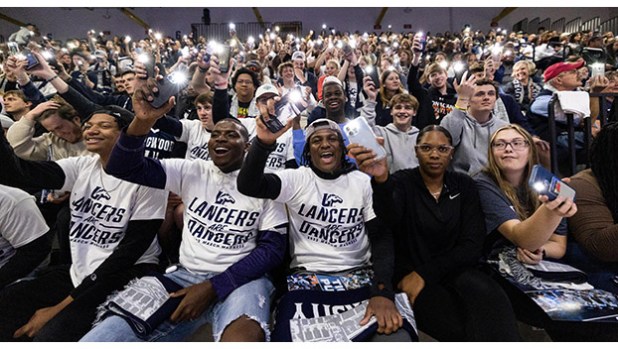 The fans at the Selection Sunday Watch Party use the flashlights on their phones to help show their excitement. 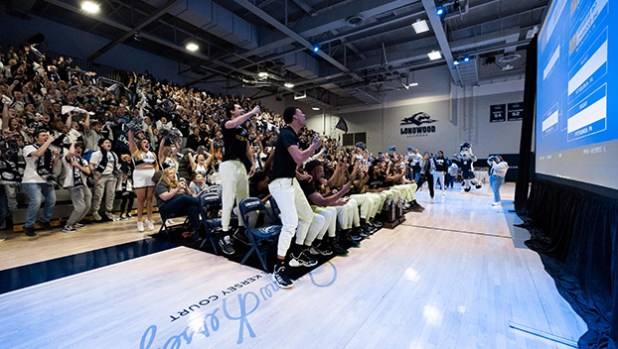 (Photos by Mike Kropf)The Longwood men’s basketball team reacts to the announcement of who they will play during the Selection Sunday Watch Party in Willett Hall.

In a season of firsts, the Longwood Lancers men’s basketball team now knows another: their first-ever NCAA Tournament matchup against.

As they have done all year, Lancer Nation responded to a call to “Pack The Hall” one more time this season for the live Selection Sunday show on Sunday, March 13. A national audience looked on as the crowd exploded as Longwood’s name was called, the way they have for an Isaiah Wilkins clutch three-pointer or a Justin Hill drive to the hoop all season.

The packed Willett Hall exploded as CBS broadcasters announced the selection, Longwood’s first at the Division I level. Players snapped selfies as the crowd jumped out of their seats and rattled the rafters.

The Lancers, who dominated the Big South conference this year, will tip off their first-round game on Thursday, March 17 at 2:45 p.m. The game will be nationally televised.

“This has been a really special year,” said Head Coach Griff Aldrich, after the selection was made. “These guys throughout the season have committed themselves to one another and to the team and that has led to success, not only for the team but for Longwood and Farmville in general. One of the other exciting things for us this year that no doubt has had a major impact on this team and the program has been to watch the students and community and alumni support both the men’s and women’s team throughout the season. You all have become the hardest place to play in the Big South Conference…this is your championship as well.”

The men’s team capped off a historic 2022 season with a dominating 19-point victory in the Big South Tournament final against Winthrop University, a team that was vying to punch its third-straight ticket to March Madness. In that game, the Lancers led from the beginning and never looked back on their way to cutting down the nets and hoisting the trophy.

“In a moment like this as the Lancers get set to take the national stage in March Madness, we’re so proud of the teams, and Coach Aldrich, Coach Tillett, Michelle Meadows, and all of our coaches, staff, and student athletes, with so much achievement on the court and off,” said Longwood President W. Taylor Reveley IV. “It’s a moment when I’m also thoughtful of and so grateful to the great figures over Longwood’s history who led the way–Jerome Kersey, Colin Ducharme, Coach Shirley Duncan, Dr. Barbara Smith, who made the Lancers national champions, Troy Austin, President Henry Willett, so long the Lancers biggest fan, and President Patty Cormier, who had a vision of Longwood’s name in lights.”

The team was buoyed all year by the energy of home crowds in Longwood’s Willett Hall, the site of Jerome Kersey Court. After a year in which Covid kept fans out of the arena, students responded with the rally cry of “Pack The Hall” and shook the rafters with deafening roars that punctuated each big shot and home win.

A unique tradition formed quickly this year between fans and players, who sprinted over to the student section after each win to celebrate with their fellow Lancers–classmates, friends, and familiar faces who all wore the blue and white.

“When the crowd gets loud, that motivates us for sure,” said senior captain Deshaun Wade, a guard who received an All Big South Team honorable mention this year. “We feed off that. There have been games where it’s gotten really intense, but this team likes to perform when the lights are brightest. It’s amazing to hit a shot and hear the crowd get really loud, I love playing in front of these fans.”

Now many of them will make the trip to Indianapolis to cheer on their team as Longwood plays its first NCAA Tournament game.