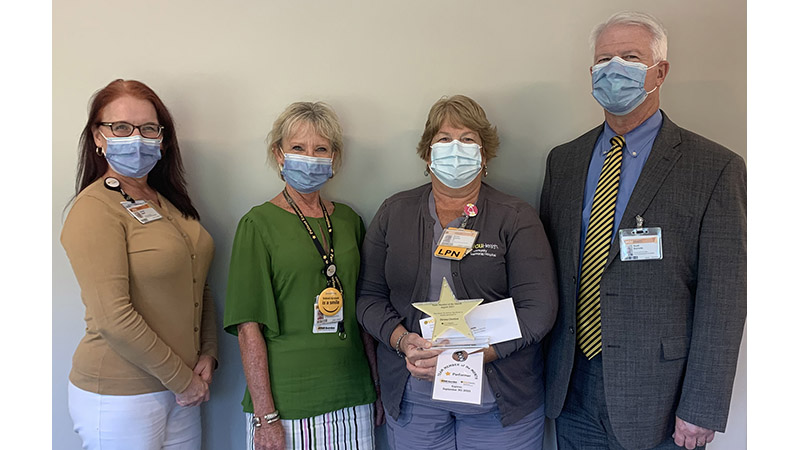 You know that colleague who everyone relies on because they’ve been there the longest? The one who knows everyone, does everything and can fix anything? That person is Donna Overton, a nurse at CMH Occupational Health and Wellness. She started her nursing career at Community Memorial Hospital in the 1980s. She left to work for other private practices and long-term care and came back in 2004 to Clarksville Primary Care Center before transferring to CMH Occupational Health and Wellness in 2007.

Donna was awarded the August Team Member of the Month award for STAR service. STAR stands for Safety, Teamwork, Accountability and Relationships. She received the STAR service award, STAR pin, a parking tag that allows her to park wherever she wants for the month of September and a $40 gift card.

“For six months Donna took on multiple extra duties covering for people who were out on extended leave and training new hires,” explained Christy Moseley-Glynn. “She pitched in and assisted other departments with customer service support when needed.”

“She is a wealth of information which makes her a great mentor to our staff,” said Stacy Davis, NP.

Donna is always open and willing to learn new things. She’s looking forward to getting back out in the community to do blood pressure screenings once it is safe to do so again.

“It felt really good to be recognized for all the extra work I did,” Donna said. “It was a nice surprise.”

Donna lives in Chase City, is married with a grown daughter and enjoys taking their pontoon boat out on Buggs Island Lake. They also vacation in the Outer Banks. She has a dog and four cats, two inside and two outside.

Other nominees for June were Isaiah Jiggetts in the C.A.R.E. Building and Paula Spence in the Emergency Department.