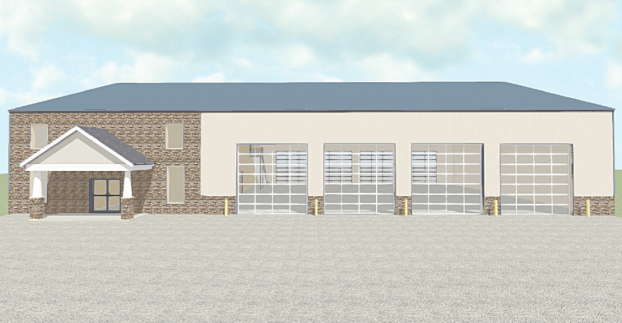 The Drakes Branch Volunteer Fire Department has received a preliminary building plan for a proposed new fire station, located out of the flood zone. The building is set to house the fire department and municipal building. Pictured is a preliminary drawing of what the exterior of the building could look like.

The Drakes Branch Volunteer Fire Department has received a preliminary building plan for a proposed new fire station, located out of the flood zone.

Currently, the town’s fire department and municipal building are housed in the same location.

Drakes Branch Town Council Member Noah Davis said the plan is to keep both entities housed in the same building.

“What we’re trying to do right now is see what the town’s need are and see what the fire department’s needs are and make the best use of the space …” he said.

Davis said while the current preliminary building plan is a rough blueprint, the plan is to have a community building everyone can utilize.

“This is their building,” he said.

Davis said he did not want the citizens to think of it as the fire department’s building or the town offices, but a building for their use.

However, he said the upstairs portion of the building would come later.

“I want the citizens of Drakes Branch to think of the building as theirs to use,” said Davis.

He said public functions could occur at the new proposed location and town taxes would not increase in light of the proposed building.

“It’s a lot of stuff going into one building …” he said.

Davis said the building would also need to be fully handicap accessible with modern features.

He said the features of the building would all depend on how much grant money the locality would receive.

“If the grants go through, it’s going to be a lot easier,” said Davis.

He said the building is still in the planning stages, so any financial numbers will be nailed down and discussed at a future public meeting.

A recent flood study conducted by engineering company A. Morton Thomas and Associates, Inc. (AMT) detailed areas within the town that have sustained damage and need improvement.

“Every time we go down there, they’ve actually marked the floor, and the first time we went down there – and this is just one example – there’s a crack in the floor about this big now, it’s this big,” Foster said previously, noting a sizable increase at a previous CRC meeting. “The walls have cracks in it; you can visibly see it pulling away.”

Foster previously said the total project budget for the flood study is $51,800.

“The cement floors are sinking, and the walls are cracking,” said Drakes Branch Fire Chief Kenny Tharpe previously. He said the building could be condemned within two years based on the damages sustained, according to an engineer who examined the building for the flood study.

According to the 8-page floody study, funding will be sought to demolish the current municipal building and the fire department is proposed to move across the street, as the land is expected to be acquired by the town, CRC’s Community Development Planner Todd Fortune previously confirmed.

Davis said although a date has not yet been set, a public meeting is expected to be held in the future to discuss the recent flood study and public input is welcome.

Any donations for the proposed new fire station can be mailed to Building Fund, P.O. Box 323, Drakes Branch, VA 23937.