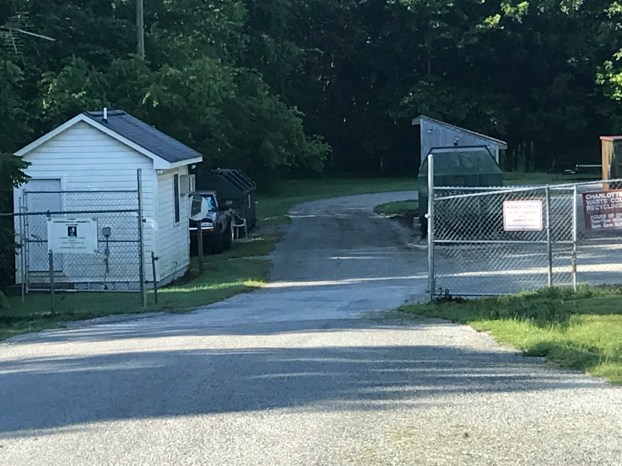 Hamlett said potholes at the other centers are also in the process of being looked at and taken care of soon. “The reason for this meeting … I’ve had several people complain about the site at Drakes Branch,” said Hamlett at a meeting of the committee July 30.

He said of the concerns listed, potholes were included, “and most recently Friday, I had two people stop me complaining that the potholes are terrible …” He said in the past, the holes were filled with crush and run, however, it’s not really fixing the problem because the holes are still present.

“When it rains, it washes it out …” Hamlett said.

He said it was previously discussed about getting the areas paved, however nothing has been done.

“With all the rain we’re getting in Drakes, it’s making a mess,” Hamlett said. “I’ve been to two other sites, they’re not nearly as bad by comparison to Drakes at all, but I think it’s something that we as a committee need to discuss.”

She said the site in Drakes Branch does have about five deep potholes in a row.

“To me, the other way to solve it would be to put some bigger rock … “ said Pierantoni. However, she said concerns were noted in Saxe with potholes and Wylliesburg/Red Oak also has one of the worst sections at their site.

Pierantoni said the only paved site is in Charlotte Court House. However, the asphalt is breaking up.

Hamlett said it is easier to use tar and gravel.

“All of them have some issues,” said Pierantoni. “To me, if we get in to paving … we cannot just go with one.”

Hamlett said all of the sites would be done if paving was decided.

Pierantoni said there are limited resources within the county. “… you have to prioritize,” she said. “ … You can’t talk about that you have a problem and fixing it unless you talk about where the money is coming from.”

“I think that can be done later,” said Hamlett.

He said as a committee, there is a problem that is not being fixed. “Putting crush and run down is not fixing the problem. All that’s doing is just exacerbating the problem making it worse. People come down there when it’s raining, they step in it, they splatter it all on their clothes and people are complaining.”

Hamlett said numerous complaints have been made, it has been an ongoing problem and no one has taken measures to fix it.

“If it continues that way, it’s just going to get worse (and) people are going to complain more.”

Pierantoni said the first thing that needs to be done at the Drakes Branch site is to put down some other type of rock.

She said going out of Saxe is just as bad, so she recommended, after looking at them to put down some bigger rocks at all of them and see how it holds up.

He said the potholes in Saxe are just as bad as the ones in Drakes Branch and changing the rocks should be looked at before going with asphalt.

Keysville Supervisor Butch Shook said there is a hump at the Keysville site at the entrance. He said Keysville has the most traffic and the most trash.

“It’s a lot of traffic in Keysville,” said Shook.

Pierantoni said if paving is ever considered, all of the areas should be considered at the same time.

“Hopefully all the centers will be monitored more closely with a proactive approach to ensure the centers don’t get into disrepair like they’ve gotten recently,” said Hamlett.

Barbara Williams, of Cullen, said she didn’t think what happened on the evening of July 27 could ever happen in... read more