Voting members of the 5th Congressional District Republican Committee, after an unexpected resignation from U.S. Rep. Tom Garrett May 28, chose Denver Riggleman to carry the Republican nomination into the November election. 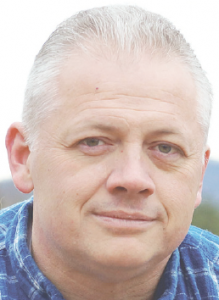 Riggleman, who served on the U.S. Air Force and is co-owner of a distillery west of Charlottesville, was one of six candidates considered and chosen by the majority of the 37 voting members who attended a Saturday meeting at Nelson County High School in Lovingston. Riggleman is set to run against Democratic nominee Leslie Cockburn.

Garrett announced May 28 that he would not run for re-election after allegations that he made requests of staff that exceeded the scope of their positions, and said he will be seeking treatment for alcoholism.

A release from the 5th Congressional District Republican Committee noted that approximately 400 citizens attended the public meeting as well as media representatives.

“Each candidate was given five minutes to address the meeting,” the release noted. “Following each round of voting, the members of the committee were granted three minutes each to speak on behalf of candidates. After four rounds of voting, Denver Riggleman was nominated by acclamation. Every step of the process,

including the balloting and counting, was open to the public and the press.”

Riggleman, in a statement, thanked the participants and committee and expressed enthusiasm about the upcoming election.

“This has been a grueling process and every member and candidate has handled it with the utmost professionalism,” Riggleman said. “It is now time to come together as a party and focus our energy to beat Leslie Cockburn. As a political outsider, veteran and small-business owner, I commit to bringing a fresh perspective to DC and focus on bringing jobs back to the 5th District.”

Mike Hankins, who was elected to the executive committee to serve as chair of the Fundraiser and Donor Development Committee and serve on the Budget Committee in April.

Hankins said he met with Riggleman at a restaurant after the meeting and spoke about issues affecting Lunenburg and Southside Virginia. He said they also discussed the possibility of Riggleman visiting Lunenburg.

“I have known Denver for about three years and I know his wife and his daughter,” Hankins said. “I think he will be an outstanding congressman and he will continue a lot of the things that Robert Hurt and Tom Garrett started. Our prayers should be with Tom Garrett as he focuses on his health and his family.”

The 5th Congressional District is considered Virginia’s largest district and has a square mileage termed larger than the state of New Jersey. The district encompasses 23 counties.