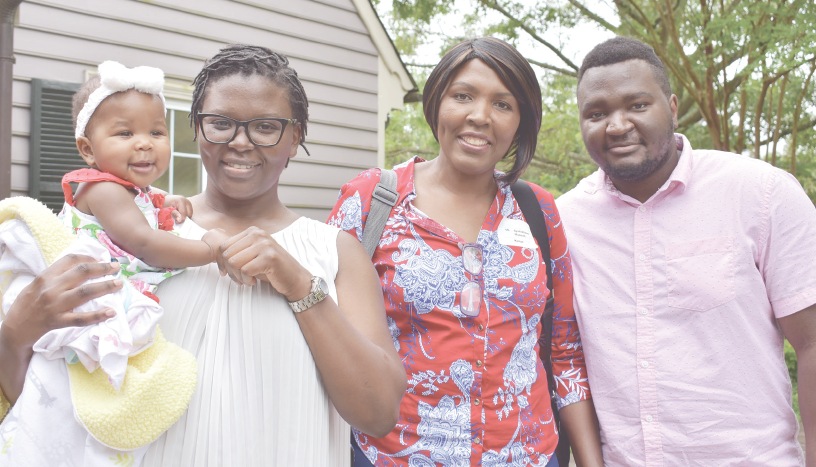 Crossing the front end of a tent that enveloped a crowd of family and friends as rain fell outside, 30 people from 21 countries became United States citizens during a naturalization ceremony held at Patrick Henry National Memorial, May 29.

The ceremony is held every year at the memorial in honor of Patrick Henry’s birthday, who was born May 29, 1736.

During the ceremony, Christina Witcher, from Ghana, said her journey to citizenship took a long time, but that the experience had been worth it.

“I started this journey from my very small village in Ghana 30 years ago,” Witcher said. “This is the day that the Lord has made, and I will rejoice.”

Norman K. Moon, district judge of the United States District Court for the Western District of Virginia, said the citizenship comes with privileges and responsibilities, responsibilities to serve their community and take action through voting.

Keynote speaker Linda Sheppard, who became a U.S. citizen after moving from Toronto, Canada with

her family in the 1960s, shared her experience and the importance to her of being a citizen.

She said her decision to become a citizen was fueled by a desire to vote.

“I think I’m here for the long haul,” Sheppard, who is director of tourism for Halifax County Tourism, said, describing her state of mind shortly after marrying. “and if I was going to be here, then I wanted to participate. I wanted to be heard. I wanted to vote.”

She said one vote may seem insignificant, but said that combined with millions of other votes, “marvelous things happen.”

Sheppard encouraged the ceremony participants, saying the journey they, and she took was not easy.

“It hasn’t gotten any easier since the late 1970s,” Sheppard said. “I often wonder the test that you had to take to stand up here before a federal judge. How many of my friends and family could pass that test? It is a tough test. Unfortunately too many of us take for granted our liberties and the rights that are afforded to us in our form of government.”

She noted that Memorial Day, celebrated the day before the ceremony, honored people who died for peoples’ rights to liberty and justice.

“In swearing you in as brand-new Americans, we uphold the central principles of democracy,” Sheppard said. “What you’ve done today, what truly matters is you have made a commitment that defines us as Americans: freedom and equality.”

She encouraged participants to vote responsibly.

“Vote your conviction,” Sheppard said. She went on to say “But we must be reminded that with rights and responsibilities comes a duty not to infringe on the right of our fellow citizens. We all can practice personal responsibility.”

Sheppard noted the significance of having the ceremony at the memorial site of Patrick Henry, who spoke about individual rights in addition to national freedoms.

Sally Tracy McIntosh, from Grenada located at the Caribbean Sea, has been a physician for 15 years, working in hospitals throughout Virginia. She said she felt a sense of relief to have more opportunities to continue her practice and travel between Grenada and the United States.

Johnathan Lanzaro, from Belize, said he has worked in Northern Virginia. His wife, Megan, attended the ceremony.

“It was awesome,” Lanzaro said about the event.