Clarkton Bridge will come down 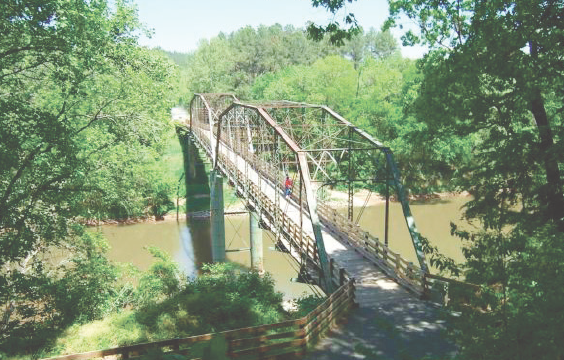 The Clarkton Bridge, which has been closed to all traffic since 2015, will soon come down.

The Clarkton Bridge, which connects Halifax and Charlotte counties, will be torn down, according to VDOT representatives at a March meeting of the Charlotte County Board of Supervisors.

A motion was approved during the meeting to authorize County Administrator R.B. Clark to sign on behalf of the board, stating their concurrence with a Memorandum of Agreement (MOA).

Tony Opperman, VDOT’s cultural resources program manager, said, “the bridge is in such poor condition VDOT does not even allow its own bridge inspectors on the bridge.”

He said the Clarkton Bridge was a lightly built bridge and “there’s not a lot of material in it.” Opperman said VDOT engaged all stakeholders in Charlotte and Halifax to look at all the available options starting in September 2016.

He said options ranged from demolition to a sensitive rehabilitation, however, the condition of the bridge trumps any effort to retain historic integrity.

He said more than 90 percent of the bridge materials would need replacement, costing an estimated $10 million. The bridge was permanently closed in 2015 as a result of a bridge safety inspection, according to Shippee.

Opperman said the decision of the stakeholders is reflected in the MOA and brings to an end five stakeholder meetings held by VDOT. According to information from stakeholders, the final memorandum declared, “VDOT will not seek abandonment of Route 620 from Route 619 to Route 626. VDOT will design, construct and install – at VDOT’s expense – interpretive signs regarding the history of Clarkton Bridge and the Staunton River corridor to be placed in VDOT right of way in Charlotte and Halifax counties.” Additionally, the document notes “VDOT will salvage elements of the bridge for public display, interpretation and future structural research opportunities.

If sufficient private funds are raised and counties apply for revenue sharing and/or transportation alternative programs and applications are approved, VDOT will design and construct to its standards and specifications and assume maintenance responsibilities for a pedestrian bridge,” according to information from stakeholders. “There are several ways we can take the bridge down,” Opperman said. It would need to be decided by May 11 if the bridge removal would be a demolition or a truss recovery and demolition contract. “There’s a difference in cost,” he added.

Opperman said that the work to remove the bridge would be done with VDOT funds and “there’s nothing in the agreement that compels Charlotte County or Halifax County to take any action or expend any funds.” Once the MOA is approved, Shippee said, “we’re looking to bid out to a contractor the removal of the bridge sometime in May.” Shippee said the removal time frame of the trusses could span from September 2018 to January 2019, avoiding peak season on the river.

“If the property owner would not be willing to donate an easement, then obviously our process changes a little bit, but right now I’m hopeful we’ll proceed down the best case scenario,” he said.