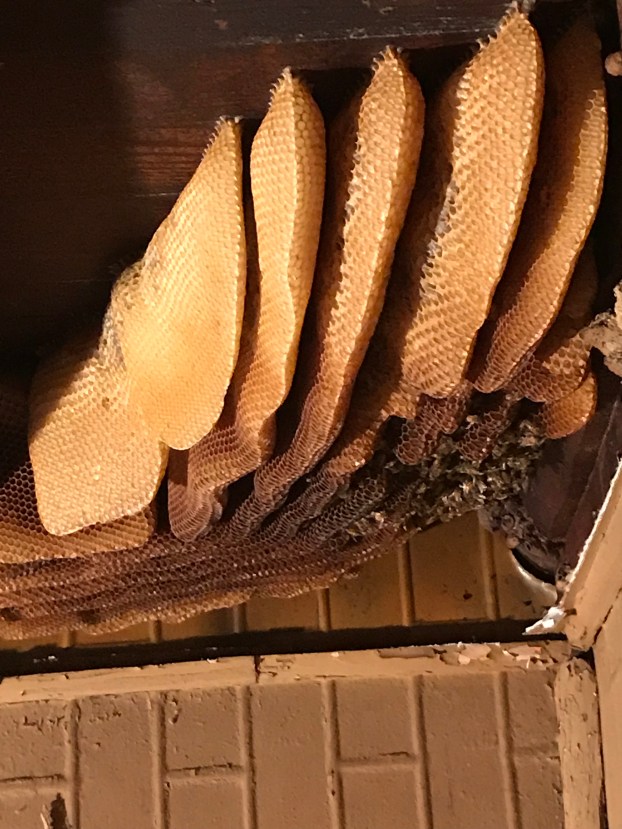 Pictured are beehives in a Cumberland County (cabin) that Dale Pruitt will soon learn how to beekeep.

Members of the Heart of Virginia Beekeepers braved the chilly weather Jan. 2 to hold their first meeting of the year and to discuss upcoming beekeeping classes.

Though bees are often associated with the sunny weather and blooming of flowers that come with spring and summer, beekeepers face a year-around task of keeping their bees sheltered and fed, and they hope their work will benefit everyone in the Heart of Virginia.

Club President Tommy Nelson, who beekeeps at his home in Phenix, said during the meeting those who signed up for the classes included those located in Farmville, Victoria, Blackstone, Crewe, Cumberland and Amelia. The classes will be held Thursday, Jan. 18, Tuesday, Jan. 23 and Monday, Jan. 29 at the Prince Edward County Extension Office.

In the classes, Nelson said a new beekeeper would be mentored by a more experienced beekeeper. They would read workbooks and answer questions new beekeepers would have rearing the bees needed to make honey or wax. A hands-on session will be held on a date to be announced, the organization’s Facebook page cited.

Some members are seasoned beekeepers who have worked years to perfect the process while others were taking on beekeeping and beekeeping classes for the first time.

Dale Pruitt is one such person. Pruitt will be taking classes with the Heart of Virginia Beekeepers.

He started beekeeping after discovering a cabin in Cumberland County with several hives.

“I’m looking forward to it,” Pruitt said. “It’s something I’ve been interested in in a while.”

He said he aims to not only aid the bees, but help those in the Heart of Virginia who would benefit from the pollination of crops bees provide.

“We have brand new people, and people who have been doing this for 25 years, all in the same room,” Morgan said.

She said the group was turned into a club, with a president, meeting minutes and a budget, to extend its services and to be eligible for grants.

She said often beekeepers in the group would wear gear to protect themselves against bee stings, but said it is a protective measure as honeybees are often not aggressive.

She said this is the fourth year in a row since the group has held beekeeping classes.

She and Nelson said most in the Heart of Virginia, beekeepers or not, would benefit from thriving bees.

“Unbeknown to them, they are participating in pollination,” Nelson said about the bees involved.

To learn more about the organization, visit Heart of Virginia Beekeepers on Facebook or contact Morgan at (434) 315-1433.

Charlotte County saw 135 vehicle accidents in 2017, which shows an increase of approximately 23 accidents compared to 2016. Of... read more