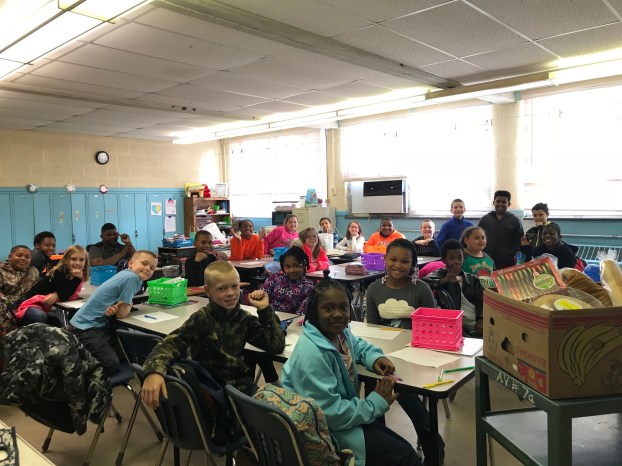 Bacon District Elementary School recently raised $845.08 to feed area families during their inaugural penny drive as a service project for the school.

In light of the holiday season, Bacon District Elementary School (BDES) recently raised $845.08 to feed area families during their inaugural penny drive, a service project for the school.

According to information from the Federation of Virginia Food Banks, “Virginia’s 11.8 percent food insecurity rate means that over 912,790 people do not know from where their next meal will come.”

Information from the school indicated that 444.5 pounds of pennies were collected to fill 11 boxes of food.

“These boxes will be distributed to local families,” school officials said. “Each box contains ham, vegetables, bread, milk, fresh fruit and a dessert.”

Math Specialist Duffie Jones said the school was excited about their efforts.

“Bacon District Elementary School combined a lesson in service to others with learning necessary math skills,” said Superintendent of Charlotte County Schools Nancy Leonard. “The students and faculty hosted a penny drive and raised money to buy meals for families who needed extra love this holiday season. Once again, Bacon District makes us proud by its tradition of teaching children about the importance of being kind to others and modeling good citizenship.”

The school thanked Food Lion and the Bank of Charlotte County, in Brookneal, for helping make the efforts a success.

“Students were asked to collect pennies to be used in various math activities, such as weighing pennies and estimating totals,” school officials said.

Drakes Branch resident Nellie Garnett has been creating her own winter wonderland in town for more than 10 years. Located... read more