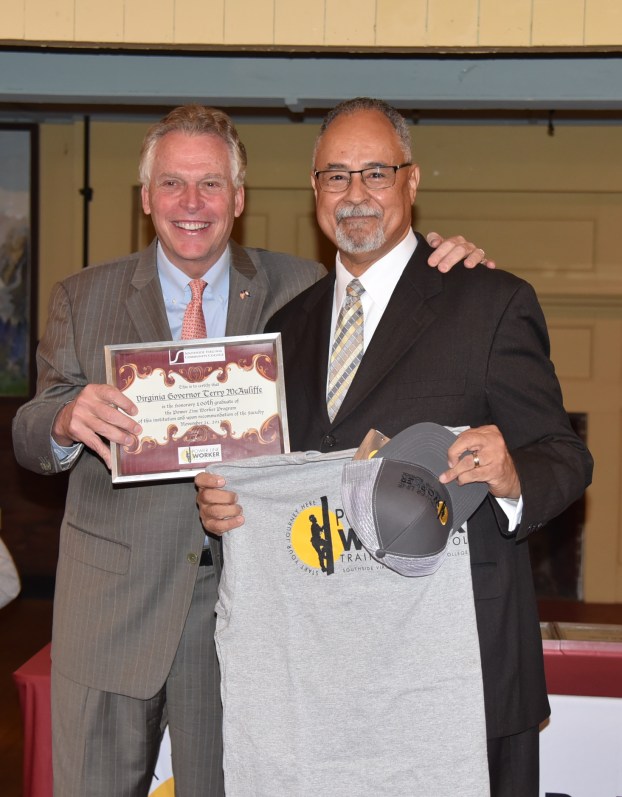 Virginia Gov. Terry McAuliffe was tapped as the honorary 100th graduate of the Southside Virginia Community College Power Line Worker Training School on Nov. 21, 2017. He joined the 24 other graduates completing the sixth class held since opening of the program in March of 2016.

SVCC’s Power Line Worker Training Program is a direct result of McAuliffe’s belief in credentials for workforce readiness and he noted his administration provided the first $200,000 Talent Solutions for Economic Development Grant to get it rolling.

“This is a great day in Virginia. We are training people for real jobs, higher paying jobs, this is exciting that we are preparing for the Bold New Virginia Economy,” McAuliffe said.

He noted that the state of Virginia is at almost full-employment, noting his efforts to bring industry and jobs to the state while ensuring there are people to fill these jobs.

The governor also praised the community colleges in Virginia for the move in the right direction by training the workforce of the state. The Power Line program also fits into the Virginia Community College System Rural Virginia Horseshoe initiative of which the goals are improving the educational outcomes of rural communities to establish a common foundation for all Virginians, wherever they may live.

The motivation to establish the program grew from the demand for power line workers throughout Virginia and the nation.

Clyde Robertson, instructor and a 41-year veteran lineman, has lead each class through completion with a 90 percent hiring rate.

After the ceremony, the class demonstrated their prowess at climbing poles, rescuing techniques and repairing lines on the field where they train at the SVCC Occupational/Technical Center at Pickette Park; the field is often referred to as “The Playground.”

A newly-formed committee designed to research policy regarding memorials at Charlotte County Public Schools (CCPS) has been working diligently to... read more