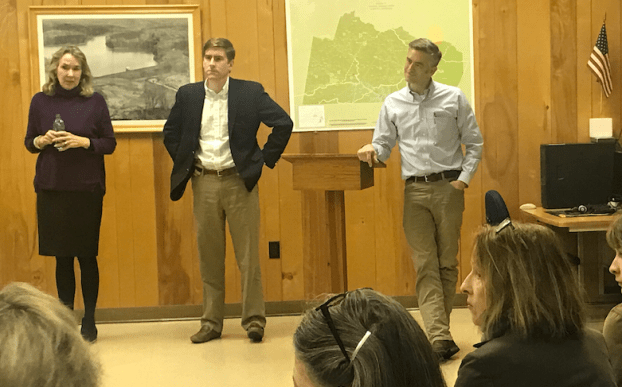 Candidates who descended upon the Town of Drakes Branch on Monday night to introduce themselves and their platforms included Ben Cullop, Leslie Cockburn, Andrew Sneathern and Roger Dean Hufstetler.

According to Charlotte County Democrats Chair Rebecca Daly, the candidates will be running against Congressman Tom Garrett, seeking the democratic nomination for Virginia’s 5th Congressional District.

Garrett, a resident of Buckingham County, was elected in 2016, according to his website.

Charlottesville resident Andrew Sneathern said, “This is a time to stand up … I didn’t get to see my son’s first piano recital this week. That’s what it means to run.”

He said the town he grew up in looks a lot like other little towns throughout the 5th District.

“We’ve got four great candidates in this room,” said Hufstetler. “We get to spend a lot of time together.”

Hufstetler said he too is from a rural family and is a champion for the working people.

“We’re going to fight for every single locality, all 23 municipalities in this district,” he said.

In addition, Hufstetler said he is a Marine veteran of Afghanistan and Iraq.

Candidate Ben Cullop said he was born in Charlottesville and raised in Virginia.

“Part of the reason I’m in this race is because the folks in the 5th District of Virginia are the people I grew up with,” he said. “They are my cousins, they are my friends, they are my neighbors, they’re my family.”

Rappahannock resident and candidate Leslie Cockburn said she lives on a farm. Previously, Cockburn worked as an investigative journalist for 35 years and traveled the world.

“I was often on Capitol Hill. I was the observer,” Cockburn said. “Now, I’m on the other side.”

“We need leadership in the House. We need people who understand these issues …,” she said.