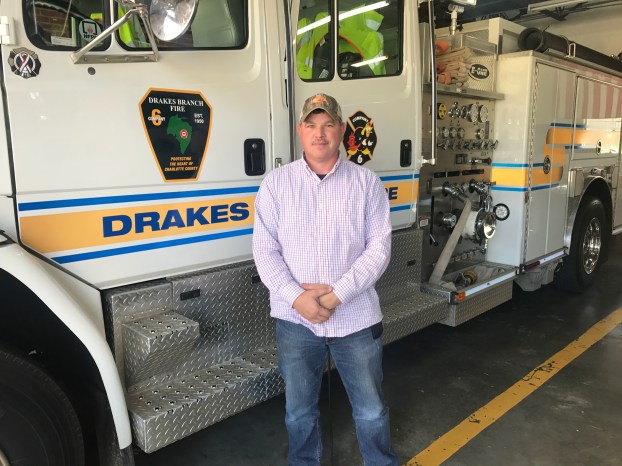 Drakes Branch native Kenny Tharpe has been an active member in the fire and EMS community for over 20 years.

KNOW YOUR NEIGHBOR:Tharpe makes a difference

Drakes Branch native Kenny Tharpe is making a difference in the community he lives and serves through his efforts as a volunteer firefighter.

Currently, Tharpe is Chief of the Drakes Branch Fire and Rescue. According to him, he has been a member of the department for over 20 years.

Tharpe said he enjoys working with the department “mostly just to help people.”

He said the department is involved in a number of community outreach activities including teaching fire safety at Eureka Elementary School once a year for fire prevention week and helping to ensure fire safety by checking smoke detectors and fire alarms for members of the community.

In addition to volunteering time to give back, Tharpe said he spends a lot of his free time at the department due to the fact that Drakes Branch is a little busier than most in the county.

“We average a call a day down here and that’s pretty good to be volunteer (fire department),” he said. Tharpe credits the elevated activity of the fire department to being one of two departments in the county who specialize in EMS services in addition to firefighting.

He said EMS services in Drakes Branch were started by Garland Hamlett, Jr.

“He started it when he was chief and we just continued it,” he said. “That’s where most of my time goes.”

Currently, Tharpe said the fire department is taking on the task of raising funds to get a new building to continue to serve the public.

Tharpe said he has lived in the Drakes Branch community all his life. “It’s my home,” he said.

In addition to being active in the fire and EMS community within the county, Tharpe owns two car wash businesses in the county.

Kenny Tharpe currently resides in Drakes Branch with his two sons Tucker and Clark and his wife Kristen.

Jihanna Lane, of Red House, graduated from James Madison University during the May 5 commencement exercises. According to a press... read more