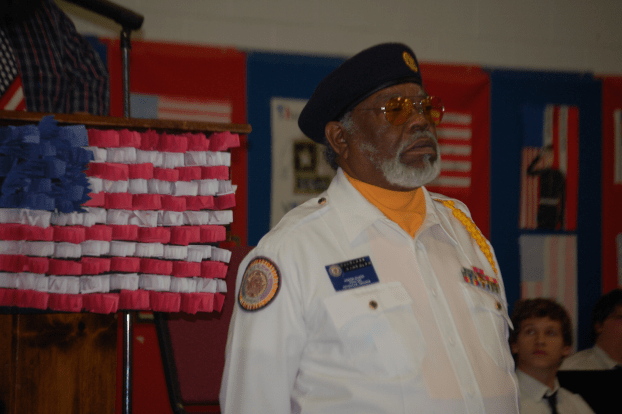 The Central Middle School gymnasium was packed with students and families Friday afternoon to honor veterans of Charlotte County, who have served from World War II onward.

Activities that students of Central Middle and Randolph-Henry High School took on to remember and celebrate veterans included creating posters that lined the gymnasium walls, writing poems, three that were read during the event and donating more than 1,500 items to the Hunter Holmes McGuire Veterans Administration Medical Center in Richmond, including shampoo, combs and brushes and clothing.

Students also created several dozen certificates, where they researched veterans, including photos, the names and their areas of service, and were later lined outside of the gymnasium for participants to view.

Retired Sergeant Major Douglass Randolph spoke during the event. A veteran of 26 years— he noted 26 years, two months and two days—in the U.S. Military, serving in Vietnam among other places, he noted that Veterans Day recognizes veterans and their families, who have each made sacrifices.

“I think I speak for every veteran here … that we would do it all over again,” Randolph said.

Randolph, who has also served in the county’s American Legion Post #260 among other organizations, said he has felt the most free to think independently and be himself in the United States.

“For me, serving this country is what it’s all about,” Randolph said, noting that four of his five brothers had served in the military and various family members who also were service members. “I love this country.”

Randolph said following the presentation he was struck by the dedication and empathy students displayed in celebrating veterans.

“It was quite the assembly,” he said.

“I think the participation and the way the students were acting to the veterans, it makes me proud to be there,” Randolph said.

The event also provided the chance for area veterans to gather and remember their experiences. School faculty and staff invited veterans for snacks and beverages following the presentation.

For Captain John Lavra, 91, who retired from the U.S. Navy after 27 years and had fought during World War II, said he could count on four fingers his peers who have served with him. One World War II veteran who befriended Lavra was Henry Reid Sr., who lives in the county.

Leroy Shook, who served in the Korean War, said he still learns from the area veterans’ service and sacrifice.

All voting for the 2017 Virginia November General Election officially closed at 7 p.m. Tuesday in Charlotte County, according to... read more