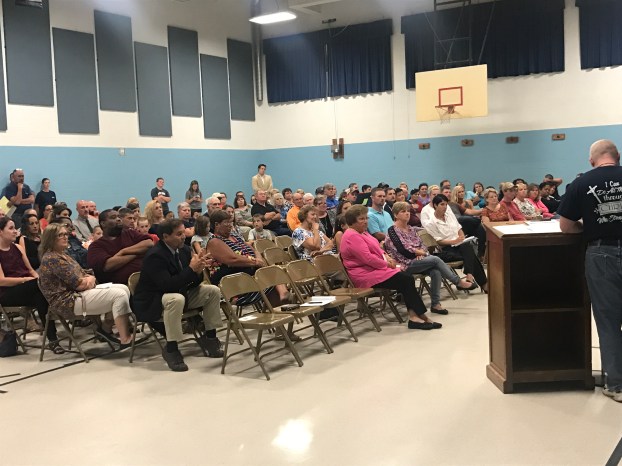 A crowd of concerned citizens gathered at Eureka Elementary for the October meeting of the Charlotte County School Board.

At a recent meeting of the Charlotte County School Board, the board voted to secure a committee of two school board members, Superintendent of Schools Dr. Nancy Leonard and three citizens for the purpose of policy research regarding memorials at Charlotte County Public Schools.

According to School Board Vice Chairman Larry Fannon, the first three citizens to contact Leonard would be considered for the committee.

Leonard said the school is looking to develop a policy regarding memorials and presented two policy options from other school divisions for research.

She said the first option included a clear indication of the necessary steps and a form to be filled out by the person making the request. Additionally, the form included areas for approval by the Principal and Superintendent.

The second policy, according to Leonard, outlined not having physical memorials, but implementing other items such as scholarships or donations.

“These are just two,” she said. However, she said the committee would look at available options to meet the needs of the school division.

The decision came after a memorial bench in memory of former Randolph-Henry student athlete Colton Osborne was deemed illegal due to its inscription of a bible verse on the structure.

“I’m sorry for the children and adults who took their time and love to so graciously remember a friend . . ., said Charlotte County Citizen David Locey during the meeting. “Decisions like these were never meant to be easy, but they do define the course of a community, a state and a nation. The real question is not about a bench with a bible verse.

It is what do we want our children to understand about the value of someone’s life? . . . Colton is not here to answer the question that only we can truly answer, do you want your bench moved?”

Charlotte County Citizen Jeff Watts said he believed it was time for the community to stand and fight.

“What we do tonight can make a change,” he said.

Watts suggested the school board declare the area around the bench as surplus property.

He said if it was placed for sale, a community group could form a foundation and purchase the area.

Community Member Caroline Watts said she thought the community deserved to know the truth about what exactly happened with the bench.

“You’ve got to stand for what you believe in,” she said.

In a previous interview with Leonard, she said, “last year, a community member indicated an interest to high school administration to give a bench for the baseball field in memory of a student. The next contact was that the bench was ready and had been placed. It was not what anyone from the school administration expected to see at the entrance of the athletic facilities. However, it was a loving gesture, so we let it be.”

However, Charlottesville Attorney Elliott Harding was present at the latest school board meeting and said, “somebody’s giving you all bad advice that this is an establishment clause violation, which it’s not. So, if you want to take it down that’s you all’s call . . . it’s not a violation of the first amendment. The purpose is clearly secular . . .”

Teresa Dunaway, a school board candidate for her district, was vocal in helping making the bench a reality. She said previously during the planning stages she made it known to Randolph-Henry High School Principal Robbie Mason and Randolph-Henry High School Athletic Director and Assistant Principal Chris Holt that the bible contained a bible verse.

During Tuesday’s school board meeting, Mason provided an overview of how the bench came to be located where it is.

Mason said he has a job to keep the school in compliance with the law.

He said the family has expressed wishes to replace the current bench on school property with an identical bench that reads, “don’t play for the trophy or the fame, play for the love of the game.”

The scripture has currently been covered with blue and white ribbon.

It was nearly 25 minutes before each of the 226 trucks, tractors and emergency service vehicles left the parking lots... read more