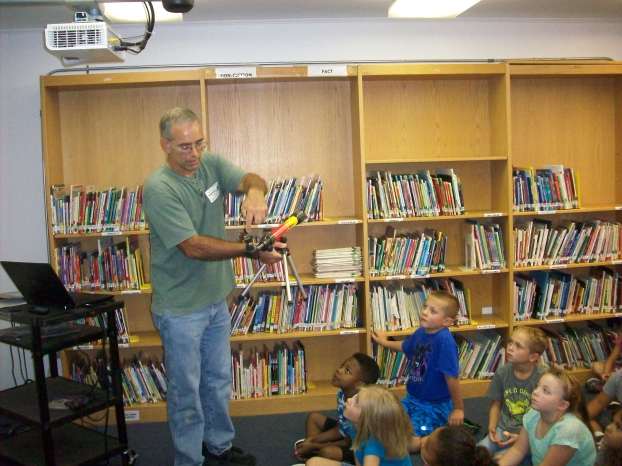 Recently at Phenix Elementary School, second graders got to hear a local astronomer share his passion for his hobby.

Mrs. Watkins, the librarian, asked Red House resident John Sokol to come and talk with the students in the library about the solar eclipse and share his knowledge of the night sky.

Mr. Sokol told the children that his excitement for astronomy started when he was in third grade in Pennsylvania. He was learning about the solar system and recently the first man had landed on the moon. Mr. Sokol went home and his next-door neighbor had a homemade telescope that he was able to use. From that moment, he was hooked on astronomy.

Mr. Sokol brought pictures of his observatory (with a sliding roof), his telescopes and pictures that were taken with his telescope of the night sky.  He also brought two telescopes for the children to see. Mr. Sokol shared some facts about the eclipse and told the children how important it is not to look directly at the sun but to wear the sunglasses that the school is providing for them.

Third-grade students at Phenix Elementary School have been recently learning about ancient China.  After reading several non-fiction books in the... read more