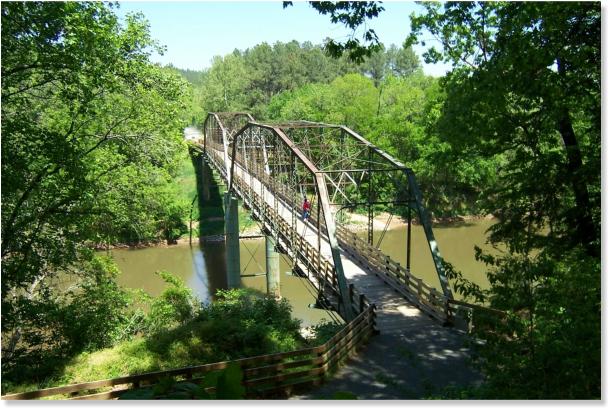 The Clarkton Bridge, a historical fixture that spans the Staunton River between Charlotte and Halifax counties, has been deemed unsafe and closed to pedestrian traffic since May 2015.

The Virginia Department of Transportation (VDOT) is set to hold a public presentation at Brookneal Elementary School, located at 133 Charlotte St. in Brookneal on Thursday from 5-7 p.m. for those interested in hearing about plans to dismantle and remove the closed truss spans cross Staunton River, the structure commonly referred to as the Clarkton Bridge at the Halifax and Charlotte county border.

According to a press release, the public will be able to view displays showing the history of the structure, the current deteriorated bridge conditions and considerations given to the future treatment of the bridge.

“In addition, information will be available on (the) Section 106 process of the National Historic Preservation Act of 1966 (NHPA) efforts,” officials said in the release.

According to VDOT spokeswoman Paula Jones, the bridge has been closed to vehicular traffic since 1998 and pedestrian traffic since 2005 due to safety concerns.

“The bridge is documented in the Historic American Engineering Record and listed in the National Register of Historic Places; it is the only remaining metal truss structure in Virginia built for highway purposes, which is supported by steel cylinder peers,” Jones said.

She said VDOT has no plans to replace the structure.

“However, VDOT is willing to maintain a future bridge funded by others within existing VDOT right-of-way at the location of Clarkton Bridge if that structure is designed and constructed in accordance with applicable federal and state laws and current VDOT design and construction specifications and standards,” Jones said.

According to the release, VDOT and a group of stakeholders representing the counties of Charlotte and Halifax, as well as the Town of Halifax, Preservation Virginia, the former Clarkton Alliance, the Department of Historic Resources and other individuals and groups have met several times in the last year to evaluate options for the structure’s future and opportunities to recognize the significance of the bridge once it has been removed.

“Representatives of the stakeholders’ group are expected to be in attendance, as well,” officials said in the release.