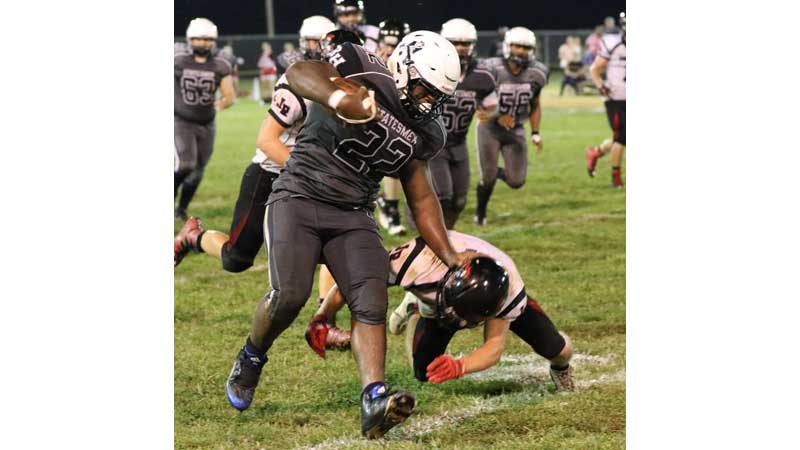 Randolph-Henry High School’s varsity football team used a scrappy performance Thursday night to limit visiting James River High School, of Buchanan, and give itself a chance for a win, but the Knights were able to make it a two-score ballgame late and come away with a 28-14 victory.

“I thought this week we came out and fought,” Statesmen Head Coach Zach Orlando said. “We learned how to play a whole football game. I told the guys down there, it was scrappy, I was proud of their fight, I was proud to call them my football team.”

The Knights produced 54 points in their season opener last week, but Randolph-Henry had them locked in an 8-8 tie at halftime and after the first quarter.

The Statesmen got on the scoreboard when senior fullback Tyrie Blow-Tydings scored on an approximately 60-yard run.

James River was able to add a couple of touchdowns in the third quarter, but Randolph-Henry kept it close by responding with two minutes, 58 seconds remaining in the period, making it 20-14 on a 34-yard run from Blow-Tydings.

The Statesmen struggled in some areas of execution, which the Knights were able to take advantage of, but Randolph-Henry remained within one score of victory until less than four minutes remained in the game.

“The Xs and Os parts we’re still working on,” Orlando said. “The things that can’t happen like making mistakes fumbling a football or giving up 3rd-and-12 or 3rd-and-13 multiple times on a drive, we’ve got to start executing on those things. But overall, I was extremely happy with our fight, and that’s the kind of football team I want to have and call mine. I thought we were scrappy tonight, and that’s the best way to put it.”