Learning during the eclipse 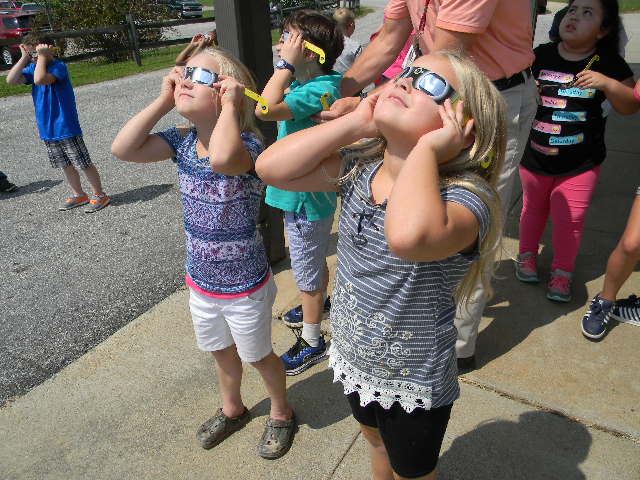 Eureka Elementary School students Jenna Newcomb, left, and Karley Bailey look toward the sky in anticipation of the solar eclipse.

While Charlotte County Public School students remained on their regular schedules during Monday’s partial solar eclipse, students were afforded the opportunity to take part in the historic event through special lenses. 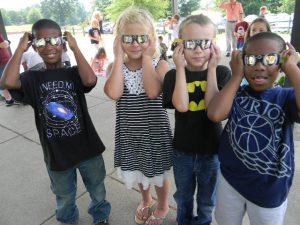 “We purchased eclipse glasses from the approved Virginia Department of Health list of vendors and eye protection requirements for all children and employees,” said Division Superintendent Dr. Nancy Leonard. She said the children were welcome to take the glasses home and keep them.

“I did not recommend changing the schedule by dismissing early because I felt like children would be safer staying in their routine and being at school with age-appropriate activities and eye protections.”

Eureka Elementary School teacher Eddie Jones said he thought it was awesome that the school provided the students, staff and faculty glasses to view the eclipse with.

According to Principal Brian Hamilton, permission slips were sent home with the children in order to view the event.

He said only those who returned a signed permission slip were able to participate.

According to the National Aeronautics and Space Administration (NASA), “a total solar eclipse is only visible from a small area on Earth. The people who see the total eclipse are in the center of the moon’s shadow when it hits Earth.”

A partial solar eclipse occurs when all three are not exactly lined up, casting a dark shadow on a small portion of a surface.

Second-grade student Aleea Phelps said she was excited about the solar eclipse “because I never saw it before.”

Leonard said the division was flexible with the comfort level of parents “using good common sense for safety and learning” during the event.

She said other activities the division surrounding the event included eclipse art, eating Sun Chips and Moon Pies and watching NASA stream the eclipse live in addition to scientific activities.