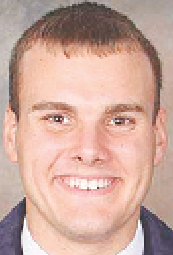 “In running for the position, contestants had to present a platform that they would conduct throughout the year as ambassador that would make an impact on Virginia’s agricultural industry,” Vaughan said.

According to Vaughan, his chosen platform consisted of three different sections, including conducting workshops in elementary schools, setting up agriculture education booths and starting an informative Facebook page about agriculture.

“The first was to conduct workshops in elementary schools across the commonwealth,” said Vaughan. “This would involve students familiarizing themselves with the food chain from farm to table. Secondly, in areas where the agriculture industry is not prevalent, I will set up booths that explain how common Virginia agricultural products are grown and raised. These two activities will stand on their own, however, the last part of my platform is to start a Facebook page titled ‘Ag Fact Friday’ that posts weekly facts about agriculture and stories from the industry.”

“The purpose of the contest is to recognize a young agriculturalist for their interest and achievements in agriculture and provide them with an opportunity to serve as an ambassador for agriculture and Farm Bureau,” according to the Virginia Farm Bureau Federation (VFBF).

“With the average American more than three generations removed from the farm, I believe that it is extremely important for all consumers to know where their food and fiber comes from and how it eventually reaches their dinner table,” said Vaughan.

Vaughan is a 2015 graduate of Randolph-Henry High School.