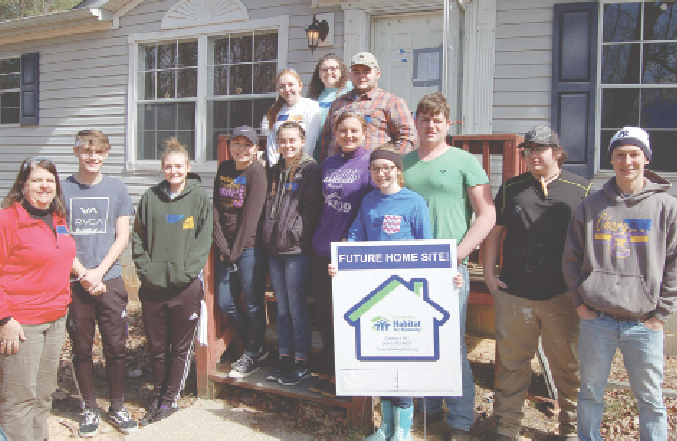 Students from Central High School (CHS) in Lunenburg County volunteered at a home that Habitat is rehabilitating in Charlotte County and volunteered at the Farmville Area Habitat for Humanity’s ReStore in Farmville Saturday.

ReStore sells donated items, such as furniture, building materials and home goods with proceeds helping families gain access to affordable and comfortable housing. The students who helped at the store were part of a CHS club called Kindness Matters.

“It (was) started to prevent bullying at school and to work on some of that,” said the club’s co-sponsor Jessica Watson. “They have taken on several service projects, mostly in the school right now.”

“I think the kids were excited to do something different and give back to the community some,” Watson said of students volunteering in Farmville and Charlotte County.

She said at the ReStore, students washed dishes, mixed paint, placed items on shelves, straightened up books and the movie room and priced items.

Watson said the club planned to help the store more in the future.

ReStore Manager Loretta Wood said all the proceeds at the store go directly to a Habitat build.

“They are helping some future family out to someday be a homeowner,” Wood said of the CHS students’ work in Farmville.

Kindness Matter Club sponsor Jean Kunath said there had been a plan to help at ReStore for two or three years now.

“I shop at the Habitat ReStore, so, about two or three years ago, I said ‘How do I go about helping? Can I help?’” Kunath said.

Kunath said she kept putting volunteering at the ReStore on the backburner until this year.

Kunath said she had no experience in building houses other than she felt that it was a good thing to do, and that’s why she had brought it up with students in the club.

Habitat for Humanity Office Manager and Volunteer Coordinator Alanna Rivera said she’d been preaching everywhere the organization goes to speak that the more people they have involved, the more they’re able to do.

“Our three biggest factors — we wouldn’t be able to survive without our volunteers, without our donors and without our partner families,” Rivera said. “There has to be a need — which there is. There’s a house in crisis all over the world right now.”

Rivera said it was helpful to have the many volunteers and adults and kids to help the projects, such as Habitat builds, come together.

The Kindness Matters club had 11 students working at the ReStore. Another group, of both CHS students and some of their friends from schools in the area, worked at the Habitat home rehabilitation site in Charlotte County.

There were 13 volunteers at the site painting and performing other tasks, preparing the home for a future family.

The ReStore, located at 1409 S. Main St. in Farmville, opened in 2009 after the Farmville Area Habitat for Humanity had been operating for 19 years.