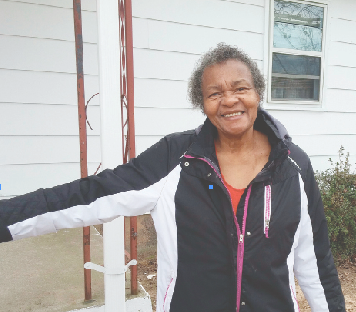 Betty Lou Hubbard, of Red House, recently received repairs to her home from Habitat for Humanity, which included new gutters and downspouts, a new exterior door, rails added to her steps, repair of existing steps, replacing decayed wood and a complete repainting of the exterior.

The Farmville-Area Habitat for Humanity recently expanded its reach to help Charlotte County and has steadily been working to complete projects in the area.

According to a press release from Habitat, its first repair project under the new partnership was recently completed in the Red House area for Bettie Lou Hubbard.

“The leadership team in Charlotte has done an outstanding job in launching Habitat in the county…,” said Habitat’s Community Outreach Director Sam Rabon.

The project is a part of the new A Brush with Kindness initiative.

According to the release, “repairs to Ms. Hubbard’s home included new gutters and downspouts, a new exterior door, rails added to her steps, repair of existing steps, replacing of decayed wood and a complete repainting of the exterior.”

The release indicated a cookout was hosted by Hubbard and other family members for those who volunteered.

When referencing the new paint job in the press release, Hubbard said, “sometimes I don’t even know if I came in to the right house since it used to be blue.”

She said the work performed to her home was beautiful, adding, “I thank God.”

In December, Rabon said “Our Charlotte County leadership team, (which) started just over a year ago, has worked very hard to lay the foundation for a solid program in that county.”

Rabon said the organization had just taken ownership of a home in Charlotte Court House that was previously vacant for years. He had said a home rehabilitation project would be in the works in the coming months.

“The current status is that work is getting ready to begin and we will need volunteers to help as the rehab moves along,” Rabon said of the home in Charlotte Court House. “Applications to become the homeowner will be taken through March 20.”

“We are very excited for this great opportunity to work with volunteers and skilled trades people from Charlotte County on this home,” said Habitat’s Executive Director Jayne Johnson. “Work will start on the home within the next two or three weeks. We hope to have the home completed by the end of June.”

The home is described as a double-wide manufactured house that sits on a block foundation.

Renovations will include a new stove and refrigerator, new HVAC system, new flooring, cabinets, energy efficient windows and fresh paint, according to Habitat.

Standard qualifications for Habitat home ownership includes residency in Charlotte for 12 months and the ability to pay a mortgage.

“Individuals must also agree to partner with the organization through homeowner education and volunteering,” officials said.

For more information about Charlotte’s partnership with Habitat for Humanity, call (434) 394-3001 or visit www.FarmvilleHabitat.org.