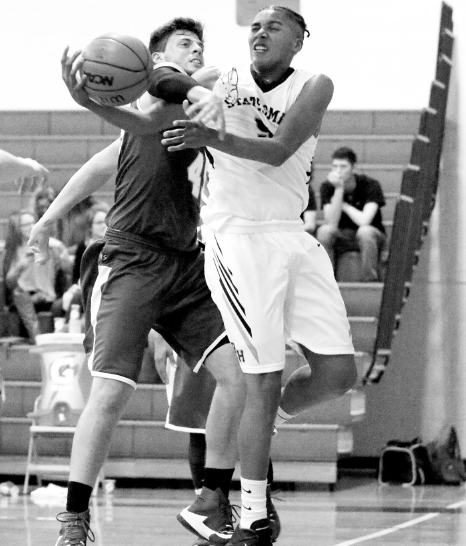 The Randolph-Henry High School varsity boys basketball team notched its first win of the new year Friday, halting a two-game skid and avenging a prior loss this season to Bluestone High School with a 51-46 comeback win at home.

The Statesmen trailed 17-11 after the first quarter, 32-24 after the second and they got down by as much as 16 in the third quarter. But the speed of the game kept the  deficit from seeming as daunting as it might in other instances.

“Bluestone pressed the whole game, so you had an up-tempo game,” Randolph-Henry Head Coach James Graves said. “Even when we were down by 16, I called a timeout and said, ‘This game, baskets are happening quickly, so we just have to pick up the defense,’ and we really did. Defense won that game.”

The recovery for the Statesmen began in the third quarter, with the Barons’ lead shrinking significantly as the period went on.

“Billy Brantley hit a 2-point shot at the buzzer that made it 38-35, Bluestone,” Graves said.

Randolph-Henry outscored the Barons 16-8 in the fourth.

For the game, junior guard Jordan Jones came off the bench to lead the Statesmen with 16 points, and junior guard Nasheim Pettus added 13 points, while helping key his team’s strong defensive effort.

“Kevon Boyd played really well,” Graves said. “He had four points, but he picked up the intensity.”

The Statesmen were playing for the second night in a row, having hosted Buckingham County High School in a Thursday game they lost 48-44.

“I think we kind of made a little turn Friday,” Graves said. “We were really flat against Buckingham. Even though we were ahead until the fourth quarter against Buckingham, we never really put the kind of effort in that I thought that we should have. Part of that was because they were kind of playing a zone, and they kind of slowed things down, but against Bluestone, we really played hard — probably the best effort in that regard that we’ve had all year. The kids really got after it.”