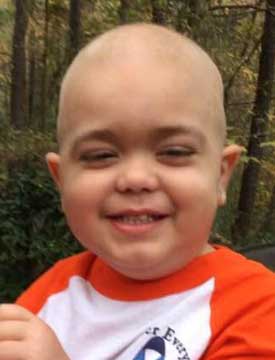 Three-year-old Red Oak resident Carson McCall has been leading a fight against Globoid Cell Leukodystrophy, also known as Krabbe Disease, after being diagnosed in June.

Carson was diagnosed with the disease after he began having trouble walking.

Since being diagnosed, Carson has undergone a stem cell transplant at Duke University Hospital. While there is currently no cure for Krabbe Disease, a cord blood transplant may be successful in stopping the progression of the disease. After remaining at Duke for a number of weeks following the transplant, Carson and his mother, Teri, remained in North Carolina at the Ronald McDonald House near the 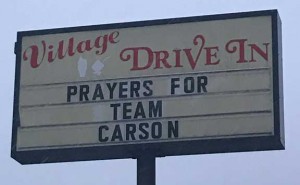 “As a family, when you are living in separate households under these circumstances for over 5 months, things can get very stressful and we always take our fears and anger out on the one’s we love the most,” Teri said.

Carson was finally discharged more than two weeks ago, about 150 days after his stem cell transplant at the time of this writing.

“We’ve made it, and though we haven’t figured out our new way of life yet, we are just enjoying having everyone back under one roof,” Teri said.

A Facebook page has been created as a support system to monitor Carson’s progress. The page has generated over 2,000 followers.

Many businesses and members of the Charlotte community have hosted fundraisers in support of Carson and to promote awareness about Krabbe Disease.

According to the U.S. National Library of Medicine (NLM), walking difficulties prove to be the most common initial symptom of the disease.

“Krabbe Disease is a degenerative disorder that affects the nervous system,” according to NLM. It is caused by the shortage of an enzyme called galactosylceramidase. “This enzyme deficiency impairs the growth and maintenance of myelin, the protective covering around certain nerve cells that ensures the rapid transmission of nerve impulses.”

The NLM states initial symptoms can include irritability, muscle weakness, feeding difficulties, stiff posture, slowed mental and physical development and episodes of fever without any sign of infection.

Teri said the largest amount of support has come from her parents. “It was nothing for me to call my dad and tell him ‘I was lonely,’ or he just (heard) it in my voice and he would text me a bit later with ‘On the way.’ My mom helped my husband with the boys in my absence, from doing homework to cooking dinner. I can’t imagine trying to go through all this without them and admire them for putting differences aside and being the best parents they can be,” she said.

In returning home, Carson was welcomed by a large number of people who lined the McCall’s driveway to greet them.

Teri said one family even decorated a truck and had a mascot for Carson.

In a recent Facebook post, Teri said, “We have done a lot of work to the house and have had the help of family and several amazing companies who donated their time and services to help us, and we couldn’t be more appreciative of their generosity. We are doing everything we know to do to make our home clean, safe and accessible for Carson.”

Carson will be able to take physical therapy at home using much of the techniques, toys and equipment Teri learned over the last four months, according to the post.

Since being back at home, the family has found peace in their time together. “It’s nothing for me to be found snuggling on the couch with a lap full of boys,” said Teri. “My husband checks on them at night several times, just enjoying the sight of everyone tucked into their beds. It’s like he and I can finally rest. The marathon is finally over.”

Carson is the son of Jarrod and Teri McCall. He has two brothers, Clayton, 8, and Colton, 5.