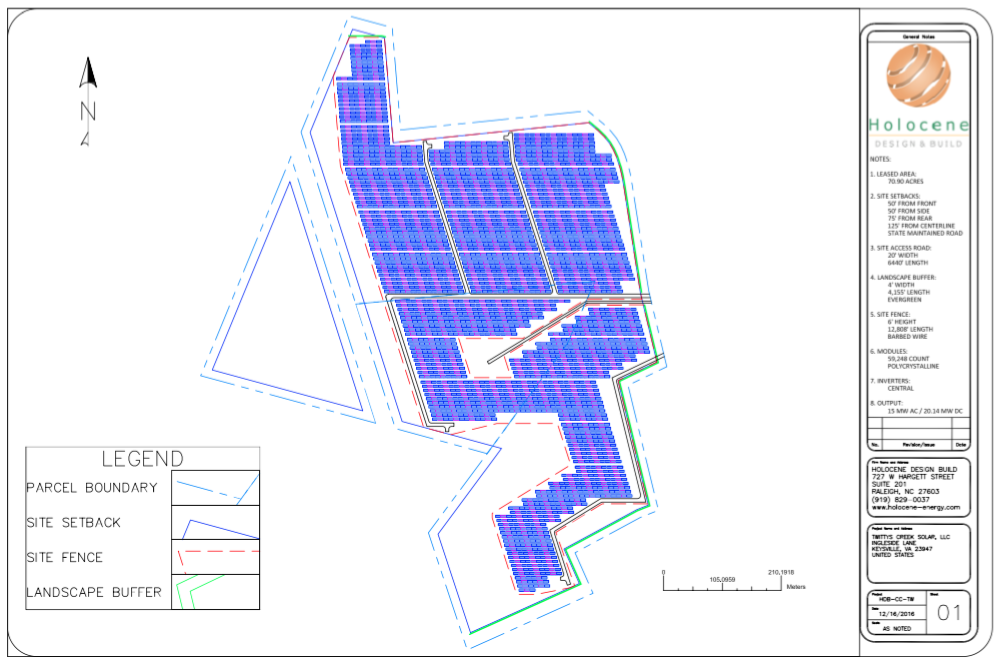 CHARLOTTE COUNTY According to a sketch of the project provided by County Planner Monica Elder, the project will include 59,248 polycrystalline modules.

County supervisors in Charlotte are set to schedule a joint public hearing with the planning commission to consider a conditional use permit (CUP) for a proposed solar project.

According to County Planner Monica Elder, Twittys Creek Solar LLC, if approved by the county, would be located on Highway Fifty-Nine outside of Drakes Branch.

“The proposed project would (occupy) approximately 70.9 acres that would be leased from property owners C.E. and Bonnie Hall, Donald A. and Margaret W. Barnum and William J. Hall,” Elder said.

According to a sketch of the project provided by Elder, the project will include 59,248 polycrystalline modules.

“It’s a … new source of ‘green energy,’” Elder said, “providing power for the substation located across the road from the site. We don’t have a concrete construction cost yet. The primary employment opportunities would come during the construction phase of the project. There would be some property maintenance involved once the facility is established, but no full-time employees.”

Twittys Creek Solar is located on Ingleside Lane in Keysville, according to the sketch.

According to the county’s Zoning Ordinance, which was amended to include solar energy systems in July, systems and equipment associated with a solar facility may not exceed 25 feet in height.

“Utility scale solar energy systems shall be enclosed by security fencing not less than six feet in height equipped with an appropriate anti-climbing device,” the ordinance reads. “A vegetative buffer at least 4-feet-wide shall be established along the perimeter of the facility. Existing mature tree growth and natural landforms on the site shall be preserved to the maximum extent possible and may be used in whole or in part to provide the required screening if they provide adequate screening from public view.”

According to the ordinance, after completion of construction, noise levels measured at the property line shall not exceed 50 decibels, “unless the owner of the affected adjacent property has given written agreement to a higher level.”

“Once a public hearing date is set the hearing will be advertised as required and all adjacent landowners will be notified,” Elder said.