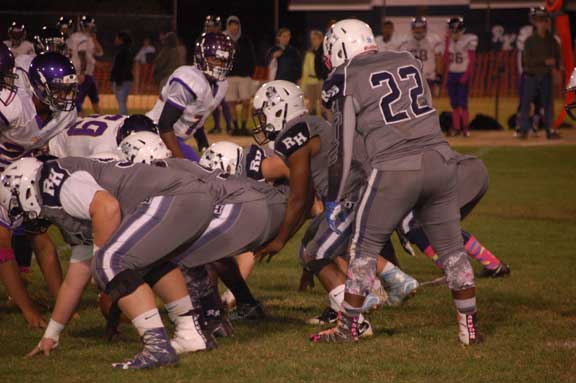 Randolph-Henry High School senior Chris Powell, preparing to receive the snap, and junior Tyrie Blow-Tydings, No. 22 preparing to block, were both named to the All-Conference 34 first team.

Statesmen Head Coach Mark McPherson acknowledged that his team’s 2-8 record this season can help limit all-conference selections, but was pleased to see the efforts of several of his players did not go unrecognized.

“I felt like we were represented as well as we could be under the circumstnaces, so I was pretty happy about it,” he said.

Powell, who spent a fair amount of time at quarterback for Randolph-Henry this season, aided his team by being a dual-threat player.

While the Statesmen rarely passed the ball, he led their rushing attack, gaining 1,022 yards and 10 touchdowns on 165 carries, averaging 6.2 yards per carry.

He returned two kickoffs for touchdowns, both in the season finale against visiting Nottoway High School.

He had a pass reception for a touchdown and also returned two fumbles for touchdowns.

“I thought Chris Powell was very deserving of the all-purpose (honor),” McPherson said.

Blow-Tydings, despite not playing in the first two games of the season, still piled up 48 solo tackles and 36 assists.

“He was the guy that really made us go on defense,” the coach said.

Highlighting what Pulliam, Martin and Vaughn made possible on the offensive line, the Statesmen rushed for 1,960 yards this year.